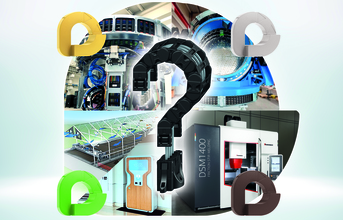 They rotate by 7,000 degrees, travel at speeds of up to ten metres per second and move three-dimensionally like snakes: energy chains made of high-performance plastics. Every two years, a panel of expert judges presents the vector award and up to 5,000 euros of prize money to the most fascinating projects and their developers.

Classical mechanical engineering is no longer the only place energy chains made of plastic are found. All over the world, they ensure that cables and hoses are guided safely – in space, at sea, and underground. In thousands of projects, energy supply systems and cables perform their tasks, overcoming great challenges – from strict particle-free requirements in cleanrooms, in the semiconductor industry to high chemical resistance in electroplating, to dirt resistance in mining to chips and sparks in woodworking. Then there is compact installation space, high speeds, and even acrobatic torsional movements. The vector award honours precisely these unique applications of energy supply solutions and e-chain systems with cables. "The competition is a great opportunity for us as a manufacturer to use our products in the finished machines and systems and learn even more exciting stories about the applications," said Michael Blass, e-chain systems CEO at igus GmbH and one of the judges. "Fittingly, we are celebrating the plastic energy chain's 50th anniversary with our customers."

The vector award comes with prize money of up to 5,000 euros. Last year alone, there were 266 entries from 32 countries. The winners will be selected by a panel of expert judges from the fields of science, industry, and specialist media and associations and will receive their awards at the 2022 Hannover Trade Show. Up until the 11th February 2022, developers can submit projects that they have already completed. In addition to the gold, silver, and bronze vector awards, there is also a green vector award. "Many industrial companies – like igus – are increasingly tackling the problem of sustainability. For example, customers can return their used energy chains to us. We sort the material by type and recycle it to produce granulate for new products. That's why it was important for us as the initiator of the vector award – together with the judges – to also honour sustainable projects with a special prize," says Michael Blass. The prize was spontaneously awarded to two projects at the last vector awards.

Compete for the vector award now at: www.igus.eu/vector