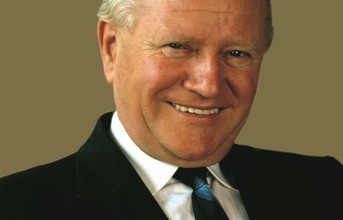 20 March 2021 would have marked a historical day for Oskar Lapp – his hundredth birthday! A great inventor and passionate entrepreneur, Oskar Lapp, along with his wife, Ursula Ida Lapp, were the founders of a globally reputed company. His inventions continue to shape connection technology around the world, even today.

The Lapp family and employees all over the world honoured this great entrepreneurial personality by laying a wreath at the old cemetery in Stuttgart-Vaihingen and by holding various commemorative events. “Our father is still a major role model today. The LAPP company would not exist without Oskar Lapp. We continue his life's work with the deepest gratitude. The fact that the third generation has now taken over the running of LAPP would definitely make him very proud”, said Andreas Lapp, Chairman of the Board, LAPP Holding AG.

From a prisoner of war to fleeing the former communist GDR, Oskar had seen it all. He showed an impressive talent for all things technical from an early age and came from a family of craftsmen. Fleeing to West Germany, Oskar initially worked for Harting and his innovative ideas soon earned him deserved attention- He was the first one to develop a rectangular connector for the industry.

Next came the electrical connection, which was quite a laborious process: The cores were all black or grey and the electrical engineers had difficulty assigning the cores to the correct ends when connecting. This required a complex process, known as continuity testing. Oskar LAPP invented a flexible cable made of coloured cores. And thus ÖLFLEX® was born. It was the first industrially manufactured power and control cable - an invention that revolutionised connection technology. It was innovative in another way too: Oskar Lapp was the first entrepreneur ever to give an industrial product a brand name. Today, the ÖLFLEX® brand still stands for exceptionally oil-resistant and flexible control cables across the world.

In 1959, the Lapps founded their company with the assistance of a 50,000 Mark bank loan. As Oskar Lapp was still employed at Harting, Ursula Ida Lapp was entered in the commercial register as the company’s founder. The company name was created at the kitchen table: U.I. LAPP KG - U.I. Stands for Ursula Ida. As with so many start-ups today, the Lapps’ business began from the garage of their house in Stuttgart-Vaihingen. Oskar Lapp took care of sales while Ursula Ida Lapp looked after the accounts, orders and logistics from home, while taking care of their young children.

With ÖLFLEX®, Oskar Lapp set quality standards that are still applicable all over the world in cable production today. He was even offering readymade cable harnesses with up to 130 coloured cores- and demand for the product soared. LAPP was also one of the first suppliers to offer and cut the cable harness length to customer requirements. ÖLFLEX® was the right product at the right time and sales grew rapidly. Later, UNITRONIC® data transmission systems, HITRONIC® fibre optic cables, SKINTOP® screwed cable glands, SILVYN® cable protection and guiding systems, EPIC® industrial connectors, ETHERLINE® data transmission systems for ETHERNET technology and FLEXIMARK® marking systems were added.

Oskar positioned his company as a one-stop shop in connection technology and this principle remains a successful formula to this day. “Our father led our company to success with hard work and ambition and with a clear view of what is really important. He exhibited persistence, entrepreneurial spirit and innovation and these are still part of LAPP’s DNA today”, said Siegbert Lapp, Chairman of the Supervisory Board, LAPP Holding AG.