State-of-the-art facility is located at Halol in Gujarat 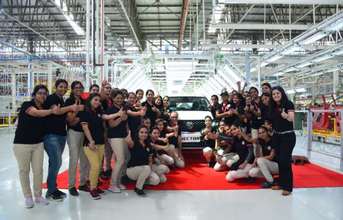 MG (Morris Garages) Motor India has rolled out the first production version of Hector from its state-of-the-art facility at Halol in Gujarat. Hector, MG’s first car in India, has gone into commercial production after one million kilometres of testing in diverse road and climatic conditions across India. With extensive localisation, more than 300+ India specific changes have been carried out in the MG Hector to suit the customer preferences and road conditions.

MG Motor India will begin shipments of the Hector SUV within the next few weeks to its widespread network of 65 showrooms across 50 cities. The Hector SUV will make its global debut on 15th May and pre-orders will begin in the month of June.

“We are proud to be rolling out the first made in India, feature-rich internet car, the MG Hector, from our all-new assembly line in Gujarat. Adopting the highest quality global manufacturing standards, the Hector has been specially customized to suit Indian customer preferences and road conditions. The MG Hector is poised to become a new benchmark in SUVs,” said Rajeev Chaba, President & Managing Director, MG Motor India.

MG India has so far invested INR 2,200 crores in its Gujarat manufacturing plant to roll out the much-awaited MG Hector. The company has set up new assembly line, new press shop, new body shop, new parts distribution centre, testing track and a state-of-the-art training facility in the plant, within a short span of 18 months. MG’s Halol plant currently has a production capacity of 80,000 units per annum and has the provision to increase the capacity going forward depending upon the requirement. The plant operates conforming to world-class manufacturing standards following production parameters beyond the current norm, with the vehicles undergoing various stringent quality tests. Further underlining its commitment to creating products specifically for India, the carmaker had also set up a captive vendor park at its plant.