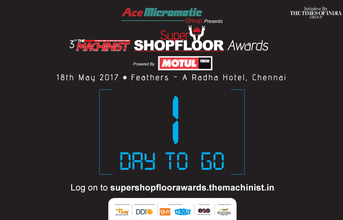 The excitement in the Indian manufacturing industry is increasing day by day as The Machinist Super Shopfloor Awards 2017 is nearing. Popularly known as #Machie Awards will take place at Feathers – a Radha Hotel, Chennai on May 18, 2017.

Shopfloor is the heart of any manufacturing company. However, often it is neglected on business platforms.  With this thought, the awards platform was conceptualised by The Machinist magazine in 2015. One of the major focuses was to reward deserving shopfloors and give them the deserved red carpet treatment.

Yes, red carpet has been inseparable part of The Machinist Super Shopfloor Awards. What new you would see at the platform? Fun, Photos, Networking, and beyond…

Let’s celebrate the excellence in manufacturing! And meet who’s who of the industyr. To register click here.