Start-up-manufactured two-wheelers have been in the news for all the wrong reasons. With the scooters going up in flames across India, it is important to understand what went wrong and what can be the remedy 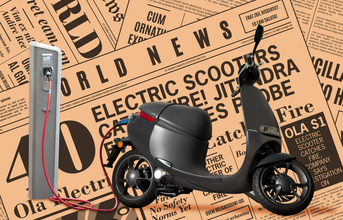 When the first news of Ola’s two-wheeler catching fire showed up on my news feed, the incident took me back to 2010’s incident of the prodigy innovation of Tata – the Nano cars – catching fire. As pure as the intentions were for bringing out low-cost vehicles for a family of four, ultimately, safety took precedence over price. Similar can be the inference for the EV two-wheeler start-ups today.

With start-ups such as Ola Electric, Okinawa Autotech, Pure EV and Jitender EV going up in flames across India over the past month, everyone has been trying to understand what went wrong with the innovations of “India’s game-changer start-ups”. Well, the short answer is overpromising, under testing, taking shortcuts and getting blindsided in a booming market. For instance, on average, the testing period on an EV two-wheeler lasts anywhere between four to five years. However, OEMs such as Ola announced their two-wheelers for the Indian market in 2020 and delivered it in 2021.

While start-ups have been reasoning for benefit of the doubt, given that elements of two-wheelers are sensitive to external conditions doesn’t simply sit right considering other EV two-wheeler manufacturers, such as TVS, Bajaj, Hero Electric, among others, which are catering to the same market, have not witnessed any similar problems so far.

THE EASE OF RUINING BUSINESS

The blame for these desultory two-wheelers hitting the market lie equally on the shoulders of testing agencies, such as ARAI and ICAD, and start-ups. While startups under-tested the vehicle, testing agencies, too, let loose in an attempt to give a growth momentum to the Indian EV ecosystem.

In the name of ‘ease of doing business,’ several essential regulations for safety have not been mandated and/or updated for Indian conditions. E.g., EVs working under the speed of less than 25 km/hr, i.e., the non-motorised vehicles (NMVs), do not require type approval. OEMs such as Okinawa, Pure EV, Jitendra EV tech, among others, are a few start-ups that offer two-wheelers under this category. Maxson Lewis, Founder and Managing Director, Magenta, explained, “The government allowed many EV OEMs to get into the market without any safety regulations. Many of them took shortcuts and restructured their systems to make the vehicle run at a speed of less than 25 km/hr. This got a lot of unregistered vehicles on the road.” He continued, “In my opinion, the regulatory authorities did not see the big risks that came with allowing unsafe practices.”

Moreover there also lie loopholes in testing components being used in the vehicle. For example, Abhijeet Sinha, Program Director, Ease of Doing Business & National Highway EV, said, “When you change a major vehicle component, you are obligated to get it tested by the authority. But currently, manufacturers are changing the components, but not being sent for retesting, considering it time-consuming.” What amps up the risk of faulty vehicles reaching the market is that the products tested are not picked at random from the batch but are the ones presented by the manufacturers. Add to it, while replicating vehicles based on the foreign model is one thing, the manufacturers didn’t tune the vehicle enough for Indian conditions. Venkat Rajaraman, CEO, Cygni, said, “The vehicles were replicated based on their working efficiency in countries, such as China and Europe. The Indian (EV) two-wheeler makers didn’t account for Indian road conditions, temperature conditions, etc.”

It is no secret that India is a price-sensitive market, which wants a lot for a menial cost. Matching these expectations of delivering advanced features and high class services has led start-ups to take shortcuts on several fronts, like with vehicles and components being imported by manufacturers to India, more for less means going for sub-par quality of components being used. For instance, in the batteries used. A lot of cheap, low-grade cells are being used in the battery, and while there exists the AIS038, AIS-048, etc., it does not, in any sense, stop the manufacturer from using low-grade cells for the battery.

Another safety fail lies in the BMS currently used in two-wheelers. A BMS usually helps with monitoring the health and performance of a vehicle. However, the gap in the information generated, documented and relayed to the customer and the lack of education/awareness to understand the data produced makes the current BMS unreliable for Indian conditions. Another area where cost plays in is EV charging. While manufacturers have been blaming the fires on negligent charging habits, efforts to build a safe charging infrastructure and customer education on appropriate charging methods have been missing. Commenting on the current charging situation in India, Lewis explained, “Customers are currently using the three-pin plug sockets, which unfortunately the OEMs have been pushing, keeping the cost of chargers low. But it is a disaster waiting to happen.”

The recent events have certainly made an impact on the market. According to a recent study by LocalCircle, the fire incidents have made Indians warier about buying EVs. The number of people who wouldn’t buy EVs due to safety concerns has increased by eight-fold to 17 per cent in seven months through March. In the survey comprising 11,500 customers, only 2 per cent were likely buy the vehicle in the next six months.

Inadvertently, the other OEMs caught in the conundrum, OEMs such as Hero Electric, Bajaj, TVS, etc., whose products have been a testament to quality and safety so far, will likely bear the brunt of the situation. Not just credibility, the fires have also raised questions on the “Make in India” aspect, as the auto parts are imported, and the vehicles are only “Assembled in India”. According to a statement given by the Director General of ACMA India Vinne Mehta in August 2021, nearly 70 per cent of the components to manufacture EVs are imported from other countries, including China and Taiwan.

When it comes to ‘who to blame’ for the testing fails, while testing agencies are, to a certain extent, at fault, the onus of testing and ensuring safe vehicle reaches the market majorly lies on the manufacturer. Kaushik Madhavan, Mobility Practice, Frost & Sullivan, emphasised, “I don’t believe it is the responsibility of ARAI because there is only so much they can do. The primary responsibility of conducting enough tests lies on the part of the manufacturer/ OEMs.” He continued, “I feel that start-ups, such as Okinawa or Ola, did not test enough. Additionally, they put a lot of responsibility on suppliers and vendors rather than taking responsibility themselves.”

Astonishingly, while no manufacturer took accountability for the incidents and continued to attest to the quality of vehicles in the market, a week within that of the road transport and highway minister Nitin Gadkari imposed heavy penalties on negligent manufacturing and defective vehicle, over 7,000 twowheelers from manufacturers including Ola, Okinawa and Pure EV were recalled.

IS EV NOT FOR INDIA?

While burning incidents have created a commotion in the EV sector, it is too soon to vilify or consider it unsuitable for India. Similar to ICE and CNG vehicles, which have and still infrequently experience similar incidents, EVs need to be given a learning curve.

EVs are the need of the time and are here to stay. According to the recent Vahan Data, the number of EV two-wheelers sold has grown five-fold in 2022 compared to last year. Two-wheeler sales have gone up by 2.6 per cent this year compared to 0.8 per cent last year. Although the incidents are a setback, it is also the perfect time to bring a system into a very disorganised EV ecosystem. It is high time that startups enter the market with a safety-first approach.

The manufacturers can begin with the most prominent part of the EV – its battery. The cells used in the battery are of utmost importance for its safe functioning. Rajaraman emphasised, “Today, we have a lot of low-quality cells in the market. The government must mandate that no lowquality cells are used at all or are used only after proper testing and certification.”

Batteries have nanotechnologies, making it inevitable that they are not anomaly-free; creating an environment where the discussion goes beyond ensures that we create a connected ecosystem where we can recall such batteries in real-time without endangering safety. Lewis suggested, “If we don’t invest in becoming safe, both in the batteries and charging, we are doing more damage than good for business. While the enforcement of mandates might increase the cost of the vehicle, it is a small price to pay against the life of a person.”

Besides battery and charging, BMS used in twowheelers plays a vital role in the safety of a vehicle. Rajaraman emphasised, “Although changes are being made in the right direction, it is important to employ the right BMS in the vehicle. It is essential that no imported BMS is used in Indian two-wheelers” Further, these BMS need to not only collect information in real-time but keep a record of it and relay the information back to the customer. Manufacturers must understand that the customer is not an expert in understanding data relayed from the BMS. What can be useful is giving battery information that is “dumbed down” for customers’ understanding or setting up consumer service centres that can reach out to customers almost immediately if any anomaly is recorded. Additionally, while today every start-ups are trying for better energy density, higher cycle life, etc., there is no guiding principle of keeping safety a priority. Including elements such as thermal pads, gap fillers, active cooling systems, conductive adhesive, etc., can help make the vehicle safer.

To build vehicles for Indian conditions, Sinha suggested, “After manufacturing, every vehicle needs to be tested based on weather conditions, use conditions, and user behaviour. The lack is not in what the companies are importing or replicating, but before they put the vehicle up for use, there needs to be a confirmation that the vehicle is made for Indian conditions.” India is only stepping up its auto components manufacturing facility, and it will take some time for India to have a completely made product in India. So, it doesn’t matter if the two-wheelers or components are being imported, replicated, or assembled in India. What matters is dedicating enough time for R&D and fine-tuning it to Indian conditions.

Government bodies are updating their mandates slowly, but “there is only so much testing agencies can do” shouldn’t be an excuse for shortfalls on the government’s end. Strings now need to be tightened, especially since going electric has been a core agenda for India’s mobility growth. Official bodies need to set up facilities to ensure the gap between mandates and actual testing before the product hits the market is bridged. To ensure a safer ecosystem adding a layer of testing & verification on a private level testing with independent organisations can be helpful. Additionally, levying heavy penalties on negligent manufacturing can also ensure much more cognisance from start-ups and companies in the market.

In the light of recent events, consumer sentiments towards products from start-ups have been titillation. While it was the perfect time for start-ups to prove their mettle, rebuilding trust could take time. Start-ups need to take the incidents as an eyeopener, learn from them, rectify the mistakes and make their testing system airtight. Besides, focus also needs to be maintained on creating a robust EV ecosystem and educating top-down. While taking shortcuts is easy, it won’t keep them running in business for long. To share monopoly with major OEMs, customer-first approach needs to be taken. Start-ups need to remember, ‘The quality is remembered long after the price is forgotten’ (Henry Royce).