At Hannover Messe 2019, we were able to present a corresponding prototype in our FutureLab for the first time - the Predictive Maintenance Box. By-Lapp Group 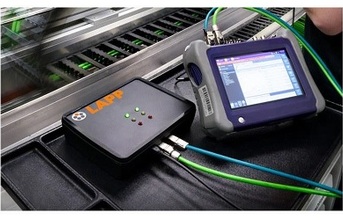 LAPP Predictive Indicator: Forecasts the life of your data line

In the area of tension between Industry 4.0, Industry of Things (IoT) and condition-based lifetime predictions, we at Lapp have been dealing with various topics in the field of predictive maintenance for almost three years. At Hannover Messe 2019, we were able to present a corresponding prototype in our FutureLab for the first time - the Predictive Maintenance Box. It calculates the Lapp Predictive Indicator (LPI) which measures the remaining lifetime of a data line.
The core topic of Digital Transformation is the collection of machine data: Engines, valves and sensors automatically report their operating states. This data is collected and evaluated and analyzed with the help of self-learning algorithms such as AI or Machine Learning. The aim is to increase the efficiency of a plant or to generate a current status picture of it in order to detect imminent failures at an early stage. If these data or processes are managed via cloud systems, even worldwide access to the plant is possible. Distances become irrelevant - because everything is connected and digital. With their highly automated and time-critical production processes, mechanical engineering and the automotive industry in concrete are particularly interested in further developments in the smart theme field. In worst cases, even the failure of a single component can cause the entire manufacturing process to come to a standstill and thus cause enormous financial damage. In order to reduce this risk, so-called condition monitoring systems offer the user the possibility to record and evaluate the performance status of any component. The plant operator is thus able to determine in good time when the failure of a component is imminent and can then initiate appropriate maintenance measures before the plant comes to an unscheduled standstill. This is particularly important for cost-intensive applications or safety-critical infrastructures. At present, a preventive approach is usually taken in such plants. This means that wear parts are replaced at predetermined intervals, regardless of their condition or remaining service life. In the area of cables and wires, the approaches of reactive maintenance, i.e. the replacement of cabling systems in the event of damage and preventive maintenance, are being pursued as well. Especially in moving and force-guided industrial applications, such as operation in an energy supply chain, cables are subjected to strong bending and flexing loads. In robotic applications, torsional forces also act. Although the cables are specially designed for this type of load, they are still considered wear parts. Despite all this, high-quality cables can withstand several million motion cycles, but must be replaced at the latest then. If the cables are not replaced, the system can fail, resulting in unscheduled downtimes and therefore high costs. Typical error patterns of cables and wires are: Wire breakage, damage to the sheath, damage to the insulation, geometric displacement in the cable structure and damage to shielding elements. These errors cause the communication of data cables to be disturbed or interrupted.
To avoid this, Predictive Maintenance can be used to forecast the failure of a system component. The approach of this predictive maintenance collects plant data during operation and evaluates it in a targeted manner. In order to optimise the costs and operational safety of the plant, the signal for the maintenance measure should neither be displayed too early (high costs) nor too late (failure of the plant). As experts in the field of connection technology, we have, of course, taken up the topic in order to develop solutions for the predictability of the service life of data cables in industrial environments. With success - at the HM19 we were able to present the prototype of our Lapp Predictive Maintenance Box, which uses the Lapp Predictive Indicator (LPI) to measure the remaining service life of data cables.
About the Background: Last year, our interdisciplinary, team of five researchers from Italy and Germany succeeded in proving various aging effects on data cables and evaluating them in a meaningful way within the framework of countless tests and a wide variety of measurements. They were in constant exchange with universities, professors and experts in order to build on the current state of research. Based on these findings, a functional prototype was then produced, which is currently being tested at the test center in Stuttgart,, in order to further optimise it to the specific needs of our customers. We have already presented this prototype, our Lapp Predictive Maintenance Box, which uses the Lapp Predictive Indicator (LPI) to measure the remaining lifetime of data cables, in our FutureLab at the Hannover Messe 2019. In addition, part of the team is currently evaluating and improving the prediction model so that the impending failure of a data line can be predicted even more reliably and even earlier - because the faster a forecast is made about the status, the faster unplanned downtimes can be counteracted. At the same time, alternative solutions are checked for plausibility. The next step is to adapt the procedure to power and control cables so that these can also be monitored.
END