Following Duster’s launch four years ago, the model has turned out to be a resounding success. 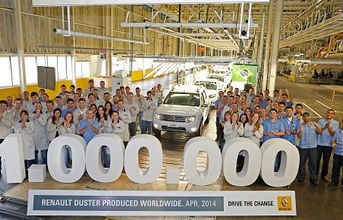 Combined worldwide productions of Renault- and Dacia-branded Dusters have already reached one million vehicles worldwide! The millionth Duster was made at Renault’s plant in Curitiba, Brazil, and will be delivered to a customer in the same country. Duster is currently marketed in more than 100 countries and made in five factories across the world. Not only is Duster one of the driving forces behind the Renault Group’s international growth, but it has also emerged as the best-selling Renault model worldwide.

“Duster is a truly global success story,” explains Arnaud Deboeuf, the Renault Group’s Entry Programme Director. “With Renault branding, it perfectly meets the demands of our international customers and is contributing to Renault’s expansion in emerging markets. At the same time, the Dacia-badged version sold in Europe and our Mediterranean Basin markets has succeeded in attracting a new clientele to the brand thanks to the styling and genuine all-terrain capability it delivers for an affordable price. Duster is definitely a model that is winning us new customers.”

The fact that one million Dusters have been sold worldwide in the space of just four years is an eloquent illustration of the model’s success. Today, it is available in more than 100 countries, branded either as a Renault or a Dacia. With Renault badging, Duster has taken the Group forward in its international markets and is designed to meet the needs of customers, with the existence of a severe cold climate version for Russia, a flex-fuel version for Brazil and a right-hand drive version with a specific interior for India.

The Dacia-badged version has proved just as popular with customers thanks to the cabin space it delivers for its price, as well as its all-terrain ability, a feature all the model’s buyers appreciate.