Under the ‘Make in India’ & ‘Atmanirbhar Bharat’ initiatives, these metro trains are being indigenously manufactured in Savli, Gujarat 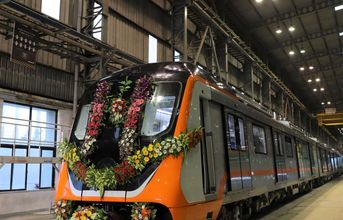 Alstom completed the handover of the first trainset for the Kanpur metro, to Uttar Pradesh Metro Rail Corporation (UPMRC). The unveiling was done at Alstom's rolling stock manufacturing facility in Savli, Gujarat by the Chief Minister of Uttar Pradesh, Shri Yogi Adityanath in the presence of Shri Kumar Keshav – MD, UPMRC, and Alain SPOHR – MD, Alstom. These metro trains are 100% indigenously manufactured at the facility in Savli, Gujarat.

Alstom completed the acquisition of Bombardier Transportation (BT) on 29 January 2021 and going forward, Alstom will be responsible for the delivery of Kanpur & Agra metro rolling stock and signalling, including scope of all BT technologies.

The new metro trains will benefit around 5 million citizens of both the cities. Additionally, the overall project will significantly contribute towards the socio-economic development of the region.

“We are proud to deliver the first metro trains, for Kanpur Metro in record time. After successfully delivering Rolling Stock & Signalling solution for the state’s capital Lucknow, we are happy to strengthen this partnership with UPMRC and redefine the mobility needs of Kanpur & Agra” said Alain SPOHR, Managing Director, Alstom India. “Our MOVIA metros are world renowned for their operational reliability, appealing design and enhanced safety features – everything that makes metro an attractive mode of transport,” he added.

“As I virtually unveil the first metro train for Kanpur, I would like to congratulate Alstom and UPMRC for the fast paced execution of the ongoing metro project”, said the Chief Minister of Uttar Pradesh, Shri Yogi Adityanath. “In addition to Kanpur & Agra, we are looking forward to bringing advanced metro service for enhanced public transportation in cities like Gorakhpur, Varanasi, Prayagraj, Jhansi and Meerut, and improving connectivity in the near future”, he added.

Speaking at the unveiling ceremony, Kumar KESHAV, Managing Director, Uttar Pradesh Metro Rail Corporation (UPMRC) said, “It is a proud moment for Alstom, which is indigenously manufacturing the rolling stock for some of the most prestigious metro projects in the country. With an illustrious track record of successfully delivering the trains for Lucknow metro in record time, we are happy to have Alstom as our partner in this journey towards transforming the face of urban mobility in Uttar Pradesh. These world-class trainsets for Kanpur & Agra will breathe life into the metro project. We are looking forward to the speedy execution of this project and catering to the transport infrastructure needs in growing cities.”