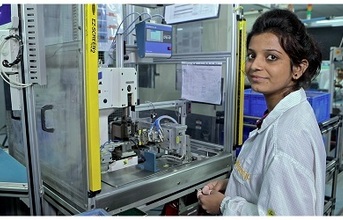 Continental has been progressively manufacturing Wheel Speed Sensors at its Manesar plant since 2010.

Continental Automotive India has reached a key milestone of producing 50 million Wheel Speed Sensors at its Manesar plant. The technology company has been consistently increasing Wheel Speed Sensor production capacity, driven by India's safety legislation and local demand. In August 2019, Continental India had reached a similar production milestone, achieving one million speed sensors a month.
Continental has been progressively manufacturing Wheel Speed Sensors at its Manesar plant since 2010. The localisation efforts substantially benefited from the safety regulations introduced in April 2019 - mandating ABS in all the passenger cars and 2-Wheelers upwards of 125 CC caused a spike in demand for Wheel Speed Sensors. The Wheel Speed Sensors aid safety by providing the vehicle speed signals to Anti-lock Braking System (ABS) and Electronic Stability Control (ESC). The precise signals inputs are used to prevent the wheels from locking or spinning, thus taking appropriate control action to maintain the vehicle's stability at any steering angles.
Sukhdeep Sandhu, head of the Passive Safety and Sensorics (PSS) business unit in India, said, "At Continental, we have a rich history associated with vehicle safety. Over the years, we have introduced several safety-critical products that have positioned us as pioneers of vehicle safety technologies. The road fatalities in India are record high. We have a critical role in bringing innovative integrated safety technologies to curtail on-road fatalities to a drastic extent."
Speaking on localisation, Sandhu said, "With our standardised processes and systems, OEMs are greatly benefiting from our localization initiative. We deliver quality products at an affordable cost with the support of our local development and manufacturing ecosystem. From design, prototyping, validation, and production, the business unit demonstrates product competence and contributes to the road safety value chain.”
Adding his views, Ronan Le Roy, Head of the global Segment Sensors and Subsystems within the BU PSS, says: “The Passive Safety and Sensorics business unit in India is a perfect example for "in the market, for the market," a systematic strategy that we follow. Supplying to local market aside, we are also exporting our products to Japan, ASEAN, and European markets.”
END