Specially set up under this agreement with BFW 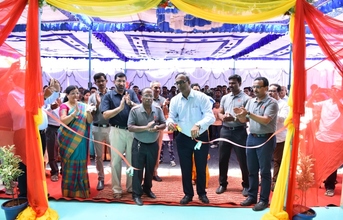 U-Tech Utpadan had recently entered into an agreement with BFW – the Machine Tool major in India to manufacture and supply Chip Conveyors and Coolant Systems that meet BFW’s requirements. Just a few months later, the new U-Tech Utpadan manufacturing facility, specially set up under this agreement, commenced production.

The new modern assembly facility and a full-fledged fabrication shop were inaugurated at the hands of Ravi Raghavan, MD & CEO, BFW, on the 24th of February, 2019. L. S. Umesh, CEO and Director of Ace Manufacturing were also present.

The project cost, over a crore of rupees, has been part financed by BFW under a soft loan arrangement.

For U-Tech Utpadan, a part of the Bangalore based 60 crore U-Tech Group, this is a big step forward in its growth story.

Under the ‘JIT’ model, U-Tech Utpadan will manufacture and stock BFW requirements, supplying the same to the BFW production line just in time, reducing inventory costs. Being in the same city, the physical proximity of U-Tech Utpadan’s new facility to the BFW manufacturing plant will also help reduce transportation costs.

The U-Tech Utpadan plant will work at peak capacity with the major production being utilized by BFW.

Shortly, plan is also to supply to BFW, specially packaged, self-contained, ready to install plug and play Coolant Systems – which BFW can supply directly to its customers.

Anant Deshpande, Executive Director, will be heading this new project. He will have the able guidance of H.A. Udaya, Founder and Managing Director of the U-Tech Group. Directors Raghupathi and Santosh will support in manufacturing / assembly and complete the core team.