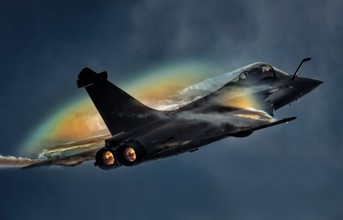 France and India have signed today the contract for the acquisition of 36 Rafale by India. The conclusion of this contract comes after the announcement by Indian Prime Minister, Narendra Modi, during his visit to Paris in April 2015, of his desire to rapidly equip the Indian Air Force with 36 Rafale.

This desire was reiterated during the visit to India by French President, François Hollande, in January 2016. The French Minister of Defence, Jean-Yves le Drian and his Indian counterpart, Manohar Parrikar, were instrumental in advancing this project during the course of their numerous exchanges.

Following on from the Mirage 2000, whose effective service with the Indian Air Force played a major role in establishing the reputation of Dassault aircraft, the Rafale was chosen by India in 2012 following a competitive bidding process initiated in 2007. The Rafale has been used by the French armed forces in combat operations for more than a decade now and has proven its operational excellence in various theatres around the world.

This new contract illustrates the strategic relationship and partnership maintained between the two countries and initiated in 1953 when India became Dassault Aviation’s first export customer.