Deadline for nominations extended to April 25 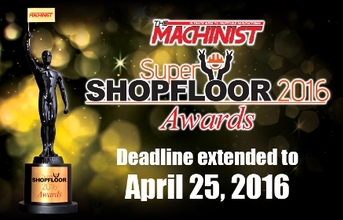 The deadline for sending nominations for the 2016 edition of The Machinist Super Shopfloor Awards has been extended to April 25, 2016. Nominations will be accepted latest by 6 pm on that day.

The Machinist Super Shopfloor Awards are the finest awards for the manufacturing industry in India. And the nominations will be evaluated by an eminent jury team on April 27 in Pune.

Some of the finest industry experts and leaders have already confirmed their participation as Jury Members. Dr. Madhu Ranjan, MD, Elringklinger Automotive Components India Pvt. Ltd., who was a jury member last year as well says, “The Machinist Super Shopfloor Awards provide a perfect platform to identify and facilitate extra-ordinary efforts by the manufacturers, which is a great motivator for those who are awarded to further enhance their performance and for others to compete with the best.”

Ramendra Kumar Sharma, Co-Founder & Managing Director, Daejung India, who is a new Jury Member, is sure that “The Machinist Super Shopfloor” Awards will offer an endorsement of Excellence in process design capability of the Indian industry on a global platform.’

So if you still haven’t sent in the nominations then now is the time. This is your opportunity to prove to the industry that your Shopfloor is indeed ‘Super’ and take home the ‘MACHIE’ Trophy.