Standards are a good thing. They make sure that an M6 screw always fits an M6 thread. Our industry is no different. By Alexander Lapp 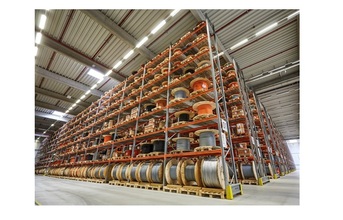 Logistics and supply chain management are just one of four core processes that we want to successfully automate.

Standardising and automating processes are key aims of every digitalisation strategy. But this often results in a loss of flexibility, with standardisation often primarily seen as just another way to cut costs. Things are different at LAPP. The company uses standardisation to improve its offer to customers. The aim is to standardise internally in order to offer customers more tailored solutions.
Standards are a good thing. They make sure that an M6 screw always fits an M6 thread. Our industry is no different. Connection technology has more norms and standards than anyone can remember. Many of these standards have one thing in common: they all relate to physical things like cables, connectors, etc. But the era of digitalisation has given birth to a new kind of standardisation that will form the basis for extensive automation. Networked connection, data and linking our products with digital services play a key role here.
Anyone who visited the LAPP futureLab at the 2019 Hannover Messe will have an idea of what I mean. A good example is the smart cable drum, which knows how often it was turned. Software then calculates how many metres of cable are left so that more can be ordered automatically when necessary. It's easy to imagine what this means when it comes to standardisation. The measurement values in the mechatronic module need to be wirelessly collected and transmitted to LAPP, where our ordering system has to interpret them correctly. But what if the customer does not want the cable drum to communicate directly with LAPP? In this case, the data that our smart drum collects must be understandable to the various ERP systems used by our customers. In turn, these must then be able to communicate with our ordering system clearly and without any errors. Unfortunately, this is not as easy as it sounds. From the moment a sensor takes a measurement to the moment the customer receives a new drum, the data must be calculated correctly and the right cable type must be found. Our system then needs to find a warehouse that has the corresponding product in stock and arrange delivery to the customer, before sending the invoice and monitoring incoming payment.

The digital Tower of Babel
This is where it gets really complicated. The customer wants all this data mirrored on their systems too. Companies like LAPP are faced with big challenges here, as different customers use different softwares and file formats. One of the problems with digitalisation is that it has lots of different "languages". So why can't companies come together and agree on how to store and exchange data, so that we can have an M6 screw for data too? Unfortunately, the digital world is far too complex for that. This may work in businesses that have a very limited target market and a handful of applications. But LAPP supplies all kinds of customers, including mechanical engineering companies, train builders, oil platform operators, dairies, construction companies and wind turbine manufacturers to name just a few. Within these sectors, each market player has their own idea of what standardisation means.
So what can be done? The promises of Industry 4.0, the Internet of Things, and all the technologies and business models that come with them can only become reality when data can flow freely and be interpreted in the same way by all partners in a value creation network. Experiments are already under way, for example in the automotive industry that aims to standardise issues relevant to digitalisation. But these are still early days. Digitalisation therefore needs a kind of standardisation that also allows for variety. Squaring this particular circle is an issue that LAPP faces too.
As well as standardisation of data and processes, we also need standardised interfaces. Standard systems "off the rack" can only do so much. Although they offer good scalability, guaranteed updates and global availability, they are aimed at a very wide clientele and become more complex with every adaptation. There is virtually no standard software on the market that can provide a solution with both metric and imperial (British and American) units that we need for our length-based products, for example. That is why a more individualised approach is called for. At the same time, we know that the closer we stick to the standard, the greater the system's performance. This makes exchanging data with our partners and customers easier.

The customer must benefit
So how do we deal with these challenges? For us, the most important thing is that the customer must benefit from digitalisation, rather than seeing it as a burden. LAPP prides itself on how well it understands its customers, and we apply this promise to digitalisation as well. The trick is to standardise and automate within the company, while being open to as many different kinds of customers as possible.
One successful example of this is our logistics centre in Ludwigsburg, which is one of the most modern warehouses of its kind in any industry in the world. The high level of standardisation here allows for a high degree of automation, which means high efficiency. The advantage of this for the customer is that they can receive most products within 24 hours. E-commerce allows us to deliver on time to even the most isolated places on Earth.

The objective: custom production
Logistics and supply chain management are just one of four core processes that we want to successfully automate. Similar plans are in place for things like sales, marketing and production processes. This transformation will allow us to move with the trend towards more customised products and digital services. The vision is focused on custom production and personalisation, i.e. offering the customer products and services tailor made for their needs. Some customers need special packaging, for example, while others require a special marking on the cable alongside our item number. Previously, these were largely done on a manual basis. In future, we want it to be automatic. Together with our customers, we are working on a standard that will allow for freedom in processing.
Whenever we talk about automation and digitalisation, one concern is never far away: will we still have jobs if so many things are automated? The answer is clear: yes. Regardless of standards, customers will always present us with requests that don't fit the mould. Humans will always be better at dealing with these than computers. But our staff need to adapt to new requirements. Instead of working according to set processes that can also be performed by machines, they will increasingly become problem solvers and consultants. We are already seeing this in our job adverts. Instead of subject specialists, we are increasingly looking for people who have social and intercultural skills, who think in terms of networks and who focus on solutions. I think this development is a good one. Machines take over the routine jobs while humans do what they do best: be creative and empathise. These are two things that we can do much better than machines. While algorithms perform the majority of standardised tasks, we can focus on the special challenges of each individual customer. They may always be different, but we want to always offer the same tailored service.
END