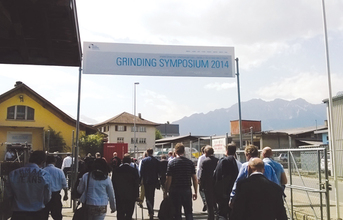 The Bernese Oberland (Ober meaning high!) is a well known tourist spot in the Swiss Alps. And global grinding major United Grinding Group couldn’t have chosen a more symbolic place for its annual event – Grinding Symposium. (Of course, it also helped that Switzerland is home to the Group.) This year’s event was the third edition of this international show and it took grinding to new heights with not just one but with the launch of five world innovations.

It all happened in three days between May 21 and May 23 in a lovely place called Thun, situated right between a beautiful lake and magnificent mountains. All group companies of United Grinding were well represented across 16,294 sq m space at the Thun Expo exhibition centre with a total of 28 machines. The highlights were of course the new launches in Blohm Prokos XT, Jung JE600, Studer S141, Schaudt CrankGrind, and Ewag Ewamatic Laser Line Ultra.

There were visitors from 40 countries and these included the Group’s customers, researchers, experts, employees of the Group and journalists. Your editor was amongst the three journalists from India. Together, all participants witnessed and experienced grinding innovation in action at 14 stations. Knowledge exchange was facilitated by practical demonstrations and 154 presentations. Twenty prominent speakers including experts from the United Grinding Group as well as from research background and industry provided cutting edge information and insights.

Thanks to their customer oriented focus on customers, the United Grinding Group companies have been steadily expanding their leading market position. Their business development during last year and in the first quarter of 2014 reflects this success. The business year 2013 was the second most successful in the Group’s history, with a turnover of more than EUR500 million. The United Grinding Group has emerged as the clear number one in the relevant grinding machine market.

Stephan Nell, CEO of the United Group emphasised during the Symposium that the Group companies were driven by the objective of making customers more successful. Accordingly, 2,200 employees in the Group are engaged with customers from a wide range of industries to become more competitive.

Aerospace, energy, automotive and automotive suppliers, transport and heavy industry, tool and die making, machine construction, tools, precision mechanics and medicine make up the nine customer segments, which increase their competitiveness with solutions from the United Grinding Group. According Sreekanteswar S, President of United Group in India, most of these customer segments are already being addressed in India as well.
END