The best of Indian manufacturing honoured at the hands of Hon. Union Min. Shri Kalraj Mishra 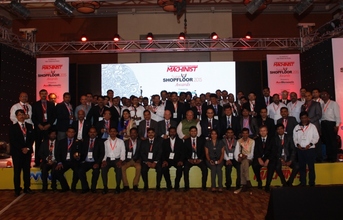 Group photograph of winners at The Machinist Super Shopfloor 2015 Awards

‘The Machinist Super Shopfloor 2015 Awards’ ceremony held on May 22 at The Westin Pune was a grand success. The awards ceremony saw some of the finest manufacturing plants in India getting honoured and awarded as ‘Super Shopfloors 2015’.

It was a moment of glory and gratitude when the representatives of these plants took home the ‘Machie’ trophy. The Machie trophy in its first attempt itself has managed to create a big impact with its unique design and appeal.

There were many highlights of the day; a fantastic CEO panel discussion, insightful partner presentations, presence of Shri Kalraj Mishra – Honourable Union Minister of MSME (Government of India) as the Chief Guest and, of course, the glittering awards ceremony.

For a detailed coverage of the day, grab a copy of the June 2015 issue. Got to the next pages to find out who were the Top CEOs participating the CEO panel and who the winners are.