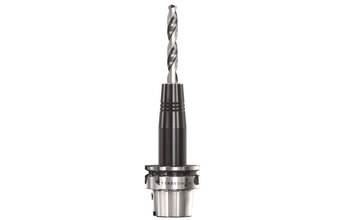 With the SCHUNK TENDO Slim 4ax hydraulic expansion toolholder, it is now possible to combine the complete outside geometry of heat shrinking mountings according to DIN 69882-8 with the proven qualities of SCHUNK hydraulic expansion technology. The slim precision mounting makes it ideal for use in series production, particularly in the automotive industry. It was particularly designed for axial operations, and shows its strength during milling close to interfering contours, countersinking, and reaming in 5-axis centers and the die and mould industry. Test series prove that the mountings with the vibration-damping properties of the hydraulic expansion technology have considerably improved the process during milling operation. The hydraulic expansion toolholder design reduces peak cutting -amplitude of the force progression in Y-direction, which results in less deflection of the tool. By reducing the load of the cross cutter and the cutting edge, considerably longer service life can be achieved. Additionally, the user benefits from having exact gauges for holes and maximum precision at the workpiece.