Production at its Pune facility to resume on 1st June 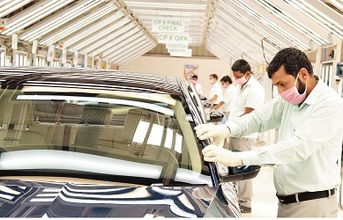 The Aurangabad facility has resumed production with reduced man-power in a single shift . The facility will produce the new Superb ahead of its launch scheduled next week and gradually ramp up production to include other models and brands.

Škoda Auto Volkswagen India Private Limited (ŠAVWIPL) resumed production at its Aurangabad production facility and commenced work as a part of the India 2.0 project activities at its Pune facility. All necessary permissions were received from local authorities and the State Government of Maharashtra and a comprehensive set of safety measures have been initiated before resuming manufacturing activities at these facilities. Both facilities are following a well-defined safety protocol, listing 60 points to ensure the safety of its employees. The ‘Start Safe’ SoP prepared in close collaboration with Medical Practitioners includes a set of comprehensive measures for all areas of ŠAVWIPL’s operations.

Gurpratap Boparai, Managing Director, Škoda Auto Volkswagen India Private Limited said, “The post Covid-19 era will have challenges new and old, however, we need to look ahead with optimism once more. By resuming production we will be in a better position to react to market demands and consumer needs. Over the past few weeks, we have been working closely with the Government, local administration and our medical team to develop a ‘Safe Production and Safe Office concept’ and implemented the same in our operations.”

The Aurangabad facility has resumed production with reduced man-power in a single shift . The facility will produce the new Superb ahead of its launch scheduled next week and gradually ramp up production to include other models and brands. As port-operations and man-power availability continues to improve, operational efficiency of inbound logistics and parts availability will aid gradual ramp-up to full production capacity and resumption of normal daily operations.

ŠAVWIPL has resumed preparation of the India 2.0 project with developments towards the Start of Production (SoP) of its SUVs based on the MQB A0 IN platform. With a focus on India, Škoda Auto has developed the MQB-A0-IN platform variant on which on which models for Škoda Auto India and Volkswagen India are being built. The Škoda Vision IN and the Volkswagen Taigun concept study showcased at the Delhi Auto Expo are the first vehicles to be built on this platform.

ŠAVWIPL has implemented a thorough 60 point SoP to sustain a safe restart of operations. These SoPs includes specific rules on distances and hygiene. For example, employees are called on to measure their temperature at home every morning and go through a 6 point health checklist before they leave for work. Wearing of facemask during travel and at work has been made mandatory. Numerous distance markers on floors act as guides for walking and for keeping distances during entry and exit.

Other provisions have been made for production staff to work in smaller teams, undertake virtual trainings, restrictions on sharing of tools and mandatory usage of gloves are some of the measures enforced to keep personal contact and the risk of infection to a minimum.

Alongside these precautions, general precautionary measures and hygiene recommendations – such as increase frequency of sanitization, touch-free sanitization stations, and rigorous employee awareness sessions to undertake protective measures like refraining from shaking hands, maintaining safe distances, regularly washing or disinfecting hands, and emergency contact information is being circulated. Along with safety measures, employees are encouraged to download the contact tracing ‘Aarogya Setu’ app to help containing the spread of the disease.