For Corona disinfection and sanitation drive 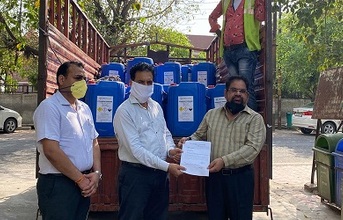 Indian Peroxide Limited (IPL) has provided a large quantity of Hydrogen Peroxide chemical under its CSR initiative, free of cost to the Gautam Buddh Nagar District Administration from its Dahej (Gujarat) plant. The chemical is environmentally friendly and will create around 120 tons of disinfectant solution, which will be used to stop Corona virus spread in different locations in the district. IPL Chairman Anil Kumar Tyagi handed over H2O2 to the Senior Project Engineer (Public Health) S C Mishra recently after a conversation with the Additional Chief Executive Officer of the administration Praveen Mishra.

Tyagi has also said that “We will do everything possible to assist government to save the country from the Corona virus. There will be no shortage of disinfectant solution and we are also open to provide hydrogen peroxide solution in other cities of Uttar Pradesh to maintain the health and hygiene of the general public. The quantity provided is worth 5 lakh rupees and is free of cost for humanity and national service."

Hydrogen peroxide is an effective disinfectant to use against the Corona virus epidemic that persists on inanimate surfaces and surroundings. A good broad spectrum of bactericidal and antiviral properties combined with excellent stability and environmentally friendly characteristics make hydrogen peroxide an ideal disinfectant for virus inactivation. This all-purpose solution releases oxygen and water when used as a sanitizer which is cost-effective and non-toxic in nature. Hydrogen Peroxide has been used regularly to sterilize medical devices and mild antiseptic has been used on the skin to prevent minor cuts, scratches, and burn infections. A 3% concentration solution of hydrogen peroxide is considered safe and used by consumers.