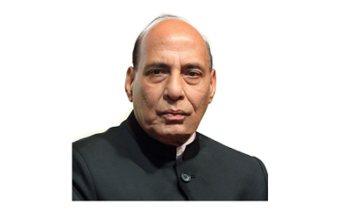 Government has adopted Prime Minister Narendra Modi’s mantra of “Make in India’, for India and the world” to build strong defence and security infrastructure in the country. This was stated by Defence Minister of India Rajnath Singh after inaugurating the new Light Combat Helicopter Production Hangar at Helicopter Division in Hindustan Aeronautics Limited (HAL) Complex at Bengaluru, Karnataka. He said, in the last five years, India has made significant progress towards manufacturing military equipment indigenously under the 'Make in India' initiative. The minister lauded the significant contribution of organisations like HAL - a Defence Public Sector Undertaking (DPSU) that has helped India leapfrog six places to become the fifth largest economy in the world. He added that there has been increase in defence exports that have crossed Rs 17,000 crore in the last two years. Highlighting the Rs 35,000-crore exports target set for the coming years, Singh expressed confidence that HAL, through its various platforms, will contribute significantly in achieving this milestone.
Rajnath Singh commended HAL for being the backbone of the Indian Air Force and meeting the requirements of the Armed Forces. “The HAL has excelled both in operations and finance in the last five years. It has achieved operational clearance on seven platforms, including Light Combat Aircraft and Light Combat Helicopter, and overhauled platforms like Hawk and SU 30 MKI,” he said. Singh also appreciated that HAL had a turnover of Rs 19,705 crore till March 2019 and it gave shareholders a healthy dividend of 198 percent.