India is not just a market but an immense opportunity for the whole world, says the PM 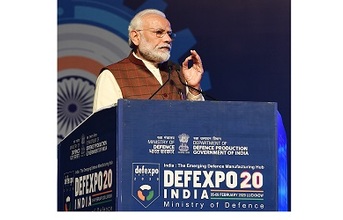 Prime Minister said that national security can be made more powerful by the partnership between the user and the producer.

Prime Minister Narendra Modi has inaugurated the 11th edition of DefExpo in Lucknow, Uttar Pradesh. India's biennial military exhibition seeks to showcase the potential of the country as a   global defence manufacturing hub. DefExpo 2020 has become one of India's largest defence exhibition platform as well as one of the Top DefExpo in the world. This time more than a thousand defence manufacturers and 150 companies from all over the world are part of this Expo.
Prime Minister said that he is doubly happy to welcome everyone to the 11th edition of DefExpo not only as the Prime Minister of India but also as the MP of Uttar Pradesh. “This is a very big opportunity for the people as well as the youth of India. Make in India will not only increase India's security but new opportunities for employment in defence sector will also be created. It will also boost Defence Exports in future”, the Prime Minister said.
Today's DefExpo is a living proof of India's vastness, its pervasiveness, its diversity and its wide participation in the world. This is proof that India is moving ahead with a strong role in the field of security and defence. This Expo reflects not only the industry related to defence, but also the world's confidence towards India as a whole. Those who know about defence and economy surely know that India is not just a market; India is also an immense opportunity for the whole world.
Prime Minister said that the sub theme of DefExpo ‘Digital Transformation of Defence’ reflects the worries and challenges of tomorrow. As life is becoming technology driven, the security concerns and challenges are becoming increasingly serious.  It is not only important for present but for our future as well. Globally, the defence forces are evolving newer technologies. India is also keeping pace with the world. Many prototypes are also being developed. Our goal is to develop at least 25 products of Artificial intelligence in the defence sector during the next five years.
Prime Minister said that the expo in Lucknow is also important for another reason. Former Prime Minister of India Atal Bihari Vajpayee, dreamt of indigenisingdefence manufacturing and had taken many steps for it.
“Following his vision, we accelerated the manufacturing of many defence products. We have issued 217 defence licenses in 2014 itself. The number has grown to 460 in the last five years.  India is manufacturing everything from Artillery guns, Aircraft carrier to Frigate Submarines today.  India’s share in global Defence Exports has also increased. In the last two years India has exported about 17 thousand crores of defence products. Now our aim is to increase Defence Exports to five billion dollars”, Prime Minister said
“In the last five-six years, our government has made research & development a major part of our nation's policy. Necessary infrastructure is being prepared in the country for defence R&D and manufacturing. Joint ventures are being worked out with other countries. An attempt has also been made to eliminate all silos with a focused approach. It has led to an environment that is ready for investment and innovation”, Prime Minister stated.
Prime Minister said that national security can be made more powerful by the partnership between the user and the producer.
“Defence manufacturing should not be limited to only government institutions, but it should also have equal participation and partnership with the private sector”, he said.
Prime Minister said that two large defence manufacturing corridors are being constructed in India. One in Tamil Nadu and the other in Uttar Pradesh.  Under the Defence Corridor of UP, Nodes will be established in Aligarh, Agra, Jhansi, Chitrakoot and Kanpur besides Lucknow. In order to give further impetus to defence manufacturing in India new targets have been set.
“Our goal is to bring the number of MSMEs in the field of defence production beyond 15 thousand in the next 5 years. In order to expand the Idea of I-DEX, it is targeted to start 200 new Defence Start-Ups to scale-up it. The effort is to develop at least 50 new technologies and products. I also suggest that the major industry bodies of the country should create a common platform for defence manufacturing so that they can take advantage of both the development and production of technology in the field of defence”, Prime Minister added.
END

Prime Minister said that two large defence manufacturing corridors are being constructed in India. One in Tamil Nadu and the other in Uttar Pradesh.