Handed over to top officials of OEMs 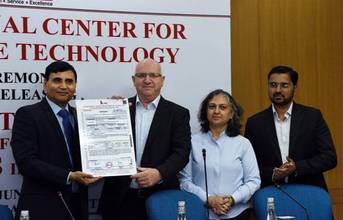 ICAT has taken many steps in providing assistance and support to the automotive industry for the development, optimization and calibration of engines and vehicles for complying with these upcoming emission norms.

The certificate was released and handed over by Director ICAT, Dinesh Tyagi to top officials of the OEMs (Original Equipment Manufacturers).

Speaking on this occasion Dinesh Tyagi said that this is India’s first certification in the two-wheeler segment for the BS-VI norms that are the latest emission norms as notified by the Government of India. He said that ICAT has taken many steps in providing assistance and support to the automotive industry for the development, optimization and calibration of engines and vehicles for complying with these upcoming emission norms.

Bharat Stage norms are the automotive emission norms which the automotive manufacturers have to comply to sell their vehicles in India. These norms are applicable to all two-wheelers, three-wheelers, four-heelers and construction equipment vehicles.

To curb growing menace of air pollution through the vehicles emission, the Government of India has decided to leapfrog from the exiting BS-IV norms to the BS-VI, thereby skipping the BS-V norms, and to implement the BS-VI norms with effect from 1st April 2020. Only those vehicles will be sold and registered in India from 1st April 2020 onwards, which comply to these norms. The norms are stringent and at par with global standards.

ICAT is the premier testing and certification agency authorized by Ministry of Road Transport and Highways for providing testing and certification services to the vehicle and component manufacturers in India and abroad. It has the latest equipment, facilities and capabilities to develop, validate, test and certify the engines and vehicles for the latest norms in the field of emission and many other facilities like crash lab, NVH lab, EMC lab and test tracks.