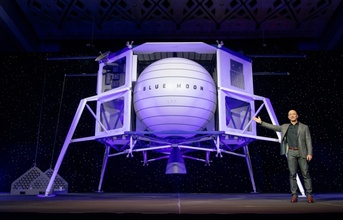 Blue Origin’s Founder Jeff Bezos recently unveiled Blue Moon, its large lunar lander capable of delivering multiple metric tons of payload to the lunar surface based on configuration and mission. The cargo variant can carry 3.6 metric tons to the surface. The organisation has also designed a variant of the lander that can stretch to be capable of carrying a 6.5-metric-ton, human-rated ascent stage. Blue also announced it can meet the current Administration's goal of putting Americans on the Moon by 2024 with the Blue Moon lunar lander.

The Blue Moon lunar lander will be powered by the BE-7 engine, a new addition to Blue Origin’s family of engines. The BE-7’s 40 kN (10,000 lbf) thrust is designed for large lunar payload transport. The engine’s propellants are a highly-efficient combination of liquid oxygen and liquid hydrogen. The BE-7 will have its first hotfire this summer. The engine will be available for sale to other companies for use in in-space and lander applications.