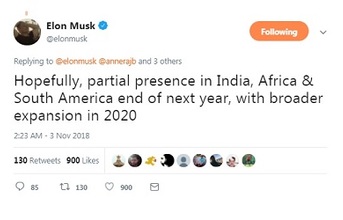 Elon Musk has given clear indications that Tesla would entering India soon. Musk confirmed the same via a tweet recently. Dated November 3, 2018, the tweet reads: “Hopefully, partial presence in India, Africa & South America end of next year, with broader expansion in 2020.”

Of course, this is not the first time that Musk has shown indications about India entry. Earlier this year, Musk had said that Tesla ‘would love to be in India’. However, Musk had also added at that time that there were ‘some challenging government regulations’. Musk had also pointed out that Tesla’s CFO Deepak Ahuja and that Tesla would be present in India ‘as soon as he believes we should’.

Many would recall that Prime Minister Modi had visited the Tesla plant in 2015. While it is difficult to interpret ‘partial presence’, it may imply having some kind of assembly unit in India. Tesla’s entry into the Indian market will certainly provide a boost to the Indian government’s push for electric vehicles.