Winner of the ‘God is in the Digital’ Contest 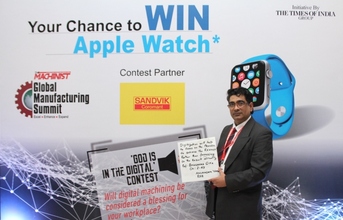 Anuragam Vatsa of RSB with his winning message

The Machinist Global Manufacturing Summit 2016 held at The Westin Gurgaon on December 7 was a runaway success. Besides being a meaningful and topical knowledge sharing platform, the event also saw an engaging and relevant contest in the form of ‘God is in the Digital’ contest, partnered by Sandvik Coromant.

The contest was open to all the registered delegates attending the Summit. Delegates had to answer a simple question to qualify for the contest - Will digital machining be considered a blessing for your workplace? The maximum word was 20 and they also got an opportunity to get themselves photographed with their messages.

Every participant also took home his photographed in custom made frame highlighting the contest. While Anuragam Vatsa, RSB Group’s Plant Head from the Pantnagar plant bagged the first prize with his relevant message, the two runner ups were Satyan Chadha of BHEL and Gaurav Kumar Saxena of PPAP Automotive Limited. Congratulations to all three of them.

The contest now enters its second edition immediately in January 2017. For more details, got to the next page.