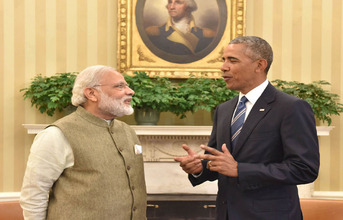 The Prime Minister of India Narendra Modi and the President of the United States of America Barack Obama met in the White House this week. Marking their third major bilateral summit, the leaders reviewed the deepening strategic partnership between the two countries. Defense is one of the major areas where the two democracies agree to be partners.

Noting that the US–India defense relationship can be an anchor of stability, and given the increasingly strengthened cooperation in defense, the United States hereby recognizes India as a Major Defense Partner. That means:

The United States will continue to work toward facilitating technology sharing with India to a level commensurate with that of its closest allies and partners. The leaders reached an understanding under which India would receive license-free access to a wide range of dual-use technologies in conjunction with steps that India has committed to take to advance its export control objectives.