The Machinist Super Shopfloor Awards witnessed an interesting conversation on role of women in the manufacturing. Here are excerpts of the discussion. 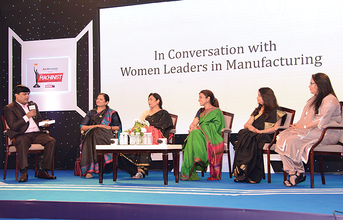 The interesting discussion started with the basic question of what made these ladies enter in the industry. Answering this question, Dr. Narayan said, “In my case, whatever was the right choice of the career I took it. And I am glad that the management then did not
think about my gender and opened doors of opportunities.” She further added, “When you are at the leader ship position, it does not matter what industry it is. When you run a company entirely, it is about three things – having intelligence, ability and thinking to define the strategy for the company. You need to ensure that your strategies are getting executed and to take care of the people.”

Giving her perspective, Sharma explained, “Your upbringing plays a major role in defining choices that you will make in your life including career. I grew up in Pune, which is an industrial town and Leela Poonawala has always been my idol.”

Sharma continued by saying, “Motivation, seeds of thoughts and encouragement matter as children grow up. Your gender doesn’t matter. What really matters is what one wants to do as a career. And accordingly, you build up yourself.”

Narrating her experience at Cummins Bindra said, “When I came to this company, what I realised was this company was not used to having women around. It was very regional focused and we have come a long way ever since. At that point, women worforce accounted for 7% now it is 30%.”
Bindra further added that “You need not be an engineer for knowing engines. With this logic, we move people in the company across functions. In my opinion, as long as you have values and the attitude, you can learn things that you need to. Additionally, you need to have conviction to do so.”
With regards to the change in mindset, she said, “Everybody wants to make change but they don’t know where do begin. So, we should help them in this regard.”
Nirmala Behera Udgata who heads Human Resources at RSB Group narrated her experience of joining her family business, “When I joined RSB, it never occurred to me that I am a woman and I am joining a male-dominated industry. Slowly and steadily, I realised that there were very less number of women at the shopfloor. Hence, I started talking to my managers and plant heads, I realised that such situation was due to their mindset. They were of the opiniom that women will not be able to tackle the pressure at the manufacturing level. However, in last 3-4 years, the women empowerment drive and forums such as The Machinist Super Shopfloor Awards is showing the results and the mindset is changing gradually.”
Explaining role of a woman leader, she said, “Being in leadership position, we should inspire more women to join and recognise their successes. This recognition will help them grow.”
Challenges
Throwing light on challenges, Kannur said, “When we talk about women in manufacturing, there are multiple challenges. Safety tops this list. However, the bigger challenge with women in our country is that they are very self-imposed. Guilt is one of the major challenges. When woman has young children, leaving them back at home and not being available for them when they want is really hard for women. But this stage remains only for 4-5 years of their career that can otherwise span between 38-40 years. As a woman rises in her career and reaches leadership position, the biggest challenge then is self-limitation. That’s where I feel self-empowerment is important. You should take things in your hand and should not wait for someone else to make things convenient for you. We as a community have to work on building this self-assurance. To do this, one of the things that really helps is having a great mentor.”
The panel discussion ended on the note that going ahead, women will not only enter the field but be successful in the manufacturing sector.
END
comments powered by Disqus