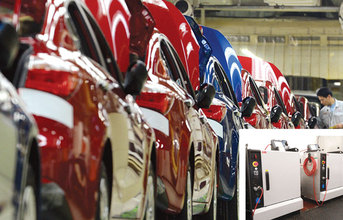 Kia is now able to reap the many benefits from the S4C+ to IRC5 controller upgrade. Plant image courtesy: Kia Motors

One hour’s drive south from Seoul, South Korea, resides the coastal city of Hwasung. Situated on the Yellow Sea, it is home to a 3.2 million square meter Kia Motors facility, built in 1989.

As one of three South Korean factories, Hwasung boasts an annual output of 600,000 vehicles of which about 70 percent are exported to some 170 countries—a fact that is very fitting considering the name ‘Kia’ means to “come out of Asia” in Korean. Kia Motors Corporation is Korea’s oldest manufacturer of motor vehicles and is part of the Hyundai-Kia Automotive Group.

To support the large-scale production in Hwasung, 15,000 employees are working two shifts at three huge production lines to produce many of Kia’s most popular car models including the Optima, Cerato, Forte, Cadenza, Quoris, Sorento and Borrego.

In this large factory, about 200 ABB robots carry out a wide variety of tasks. Up until earlier this year, some of those robots were still operating using the older S4C+ controller—the computer that acts as the robot’s brain by carrying out commands and ensuring safety.

However, in January 2014 ABB completed an upgrade of the S4C+ controllers to the newer IRC5 controllers for 20 of these robots. They included the IRB 6400R, IRB 4400 and IRB 6600 used for foundry, die casting, surface treatment and material handling.

“To reduce costly production line downtime, ABB offered us two options,” says a Kia Project Manager authorised to speak on the company’s behalf. “The first was one in which all the S4C+ key components were replaced and the second in which the entire controller was replaced. Despite the higher cost of replacing the entire controller we were convinced it would help improve our productivity even further. Despite a tough delivery timeframe ABB managed to replace the controllers in time and on budget.”

The installation was performed during weekends when lines were officially halted and risk for impacting production was minimised. Prior to the upgrades, ABB conducted a pre-inspection of the factory, systems and work environment, leading to a well-organised project schedule, a full understanding of the programming needs and the order process.

“This was a project that had never been attempted before at ABB, so we had to face the unexpected,” says Seon-Moon Jung, ABB Project Manager. “Nevertheless, the project was completed successfully thanks to global ABB team support and proactive feedback from our Korean ABB colleagues.”

Kia Motors is now able to reap the many benefits from the S4C+ to IRC5 controller upgrade, including a reduced failure risk, easier maintenance, standardisation with other factory systems, and fewer spare parts needed. As an added benefit, the new controller comes with a new operating system that has Korean language support.

“We are truly satisfied with what ABB has done for our production line,” says the Kia Project Manager authorised to speak on the company’s behalf. “With our new, easier-to-understand controller system and reduced maintenance from standardisation with our other factory systems our robotic systems are prepared for the future.”

Kia Motors is now able to reap the many benefits from the S4C+ to IRC5 controller upgrade, including a reduced failure risk, easier maintenance, standardisation with other factory systems, and fewer spare parts needed.