The machines that changed the world of motorsport 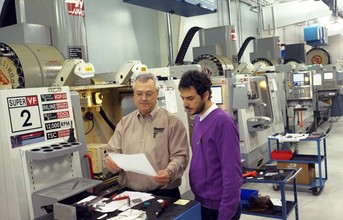 All eyes were on Haas F1 Team when it took its place on the starting grid for the 2016 Formula 1 World Championship, the first American F1 team to do so for 30-years. What many may not have known at the time – certainly more so on the European side of The Atlantic – is that before entering F1, Haas Automation Inc. founder, Gene Haas, had already enjoyed a long and illustrious career as a team owner in NASCAR, the spectacular, fast-and-furious, US-based stock-car series, famous for its wheel-to-wheel racing on mostly oval, banked circuits.

The Stewart-Haas Racing (SHR) NASCAR team, and Haas F1, are headquartered in Kannapolis, North Carolina – a city rich in the knowledge, expertise and technologies that go toward designing and building 200+ mph (320 km/h) race machines. SHR is one of the top teams in the NASCAR Sprint Cup championship, and can boast a long list of victories and poles. At the time of writing, SHR driver Kevin Harvick is leading this year’s championship, with teammate Kurt Busch in 8th place. If Harvick wins, it will be his second championship for the team since he won in 2014.

A team owner moving from NASCAR to F1 is unprecedented. Many can be forgiven for thinking the plan, when it was announced, was overly ambitious by nature, all motor racing disciplines are infamously unforgiving, none more so than the one that claims to be the sport’s pinnacle. But, the US team’s impressive debut at the first grand prix of the season, in Melbourne, Australia, silenced many of the skeptics. Haas F1’s French driver, Romain Grosjean, came in sixth, winning points on his inaugural outing. To put this extraordinary feat into perspective, it was 2002 that a new Formula 1 team last achieved points in its first race of the year.