From a garage to a global market leader: the couple who founded igus celebrate their 90th birthdays 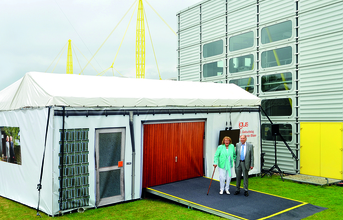 Together, Günter and Margret Blase laid the foundation for a motion plastics breakthrough in industry in 1964 when they founded igus in their backyard garage in Cologne-Mülheim. In 2021, the internationally active company supplies customers all over the world with its lubrication-free and maintenance-free motion plastics. On the occasion of the founders' 90th birthday, igus is bringing that garage back to life.

When Günter Blase drives to igus on his 90th birthday, as he does on many days of the year, the company founder can currently see the construction progress of the new company building on the B8. The new building is being erected next to the headquarters in Cologne Porz-Lind and can be identified from a long way off by its signature yellow pylons. This is where igus GmbH develops and produces motion plastics – high-performance plastics for moving applications. The tribo-polymers are being used all over the world to make moving parts lubrication-free, quiet and lightweight – on theatre stages and in mountain bikes and office furniture, in offshore drilling rigs, crane systems, ships and space rockets.

In 1965, a year after the founding, none of this was imaginable when the first motion plastics were developed in a 55-square-metre garage in Cologne-Mülheim. Blase had recognised the potential of plastic early on and realised that injection moulding could be the key to rationalisation in industry. So, after eight years of a steady job at a company in the plastics industry, he decided to strike out on his own. His wife, Margret, who also celebrated her 90th birthday this April, supported his decision. As an independent tax advisory agent, she also assumed responsibility for the new company's accounting and finances while her husband focused on production. For six years, igus manufactured motion plastics from the garage as a simple contract manufacturer for a few industrial customers.

56 years later, on the occasion of the couple's 90th birthdays, a replica of this garage stands in front of the 90,000 square metre igus factory campus designed by architect Sir Nicholas Grimshaw in 1994. The interior of the replica displays a number of milestones in the company's history, such as the first injection moulding machine. Much has changed since the garage years: the product range now includes over 200,000 parts that can be delivered from stock and ranges from predictable energy chain systems under guarantee to intelligent 3D printed special parts to robot components for a cost-effective introduction to automation.

More than 4,500 people at 35 igus branches all over the world work every day to ensure that customers can improve technology while cutting costs. But igus still holds to a Günter Blase maxim that is truer than ever: "We always have to be ready for 50 per cent less and 50 per cent more." And the early expansion of machine and raw material warehouse capacities during the pandemic still ensures relatively fast delivery times during this period of rapid economic recovery. Building a new factory will move this development forward into the future. The factory's construction is a project which Günter Blase, always fascinated with architecture, continues to actively support.