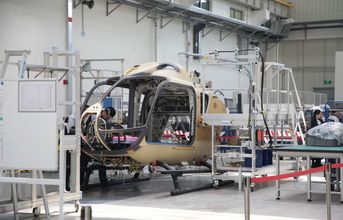 Airbus Helicopters has expanded its industrial footprint and partnership with China with the opening of the H135 final assembly line (FAL) in Qingdao. The factory is the first helicopter FAL built by a foreign manufacturer in China, as well as the first H135 FAL outside of Europe.

The opening of this FAL follows a cooperation agreement signed between Airbus Helicopters and China in 2016 for the purchase of 100 H135s destined for the Chinese market. Ninety-five of these 100 helicopters will be assembled on this FAL from 2019 onwards.

Main components including the main fuselage, main gearbox kits and rear fuselage will be shipped to Qingdao from Donauwörth, Germany and Albacete, Spain respectively.

The 6,500sqm Qingdao plant is composed of four working stations, a paint booth, ground and flight test areas, and a delivery centre. The site will employ around 40 people, 23 of whom received on-the-job training in Donauwörth.

The first aircraft roll-out from Qingdao is expected to take place in the second half of 2019. Operations will start with an annual capacity of 18 helicopters, which could be doubled to accommodate future growth.