Located in Malaysia, the facility is for customers in the Asian-Pacific region 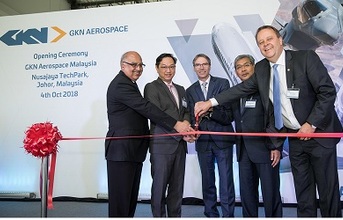 GKN Aerospace has officially opened its repair and research facility for aero-engine systems in Johor, Malaysia

GKN Aerospace has officially opened its repair and research facility for aero-engine systems in Johor, Malaysia. At the Farnborough Air Show in July of this year, GKN Aerospace announced the establishment of the aero-engine repair site, and the creation of 150 jobs growing to 300 within two years. A team of 15 people has been built to date. GKN Aerospace has invested $30 million in the site and in its state of the art equipment and technologies. The expansion to Asia is an important part of GKN Aerospace’s long-term growth strategy and global operating model.

The site will initially focus on servicing engine low pressure compressor (LPC) components for CFM56-5B, CFM56-7 and V2500 and will be operational in 2019. Research will be centered around the application of additive manufacturing technology into engine parts repair. The facility will complement GKN Aerospace’s existing component repair facility in San Diego, CA to meet growing demand in the Asia Pacific region, with investments targeting the growth in the single aisle market expected in the region.