Innovator of the Year award

in the electromechanics category for its ix Industrial connector 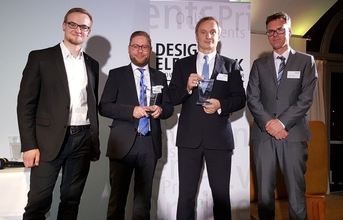 The HARTING Technology Group has long been known as an innovative company. Now HARTING has been honoured as "Innovator of the Year" in an award ceremony in Munich. HARTING garnered the award from DESIGN&ELEKTRONIK trade magazine in the electromechanics category for its ix Industrial connector. The connector was jointly developed by the Espelkamp-based family-owned business together with Japan’s HIROSE technology group and placed on the market.

In response to the challenging and growing demand for global digitisation technology, HIROSE and HARTING agreed last year to team up and bundle their strengths. The result is the jointly developed ix Industrial – a miniaturised Ethernet interface for high data rates. Together, both partners have standardised the new ix Industrial mating face to IEC/PAS 61076-3-124. This standardisation gives users investment security and, thanks to a broad technological base, consistently the right contact for future applications in the “Internet of Things”.