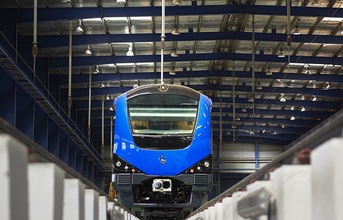 Alstom has been awarded a contract worth €98 million (Rs 798 crores) to design, manufacture, supply, test, and commission 78 advanced metro coaches by the Chennai Metro Rail Limited (CMRL). These new metro cars will operate on the 26 km corridor, a part of Phase-II which will connect Poonamallee Bypass – Light House through 28 (18 elevated & 10 underground) stations.

Scope of the contract includes manufacturing of 26 metro trains (three-car configuration) that can operate at top speed of 80 kmph, as well as training of personnel. With 25 KV power supply for optimal energy-efficiency, Alstom's Metropolis metros will ensure safe and reliable passenger transport for over 11 million citizens of the city. Additionally, the overall project will significantly contribute towards the socio-economic development by connecting key zones.

The metro trains are designed & engineered to run driverless enabled with Unattended Train Operations (UTO). These trains can completely run-on signals and its operations will be monitored from the Operations Control Centre (OCC).

In line with the Government’s ‘Make in India’ vision, these metro cars will be 100 per cent indigenous manufactured at one of Alstom’s largest urban rolling stock manufacturing facilities in Sricity, Andhra Pradesh. This facility has an annual capacity of producing 480 cars and a strong portfolio of catering to several domestic and international metro projects.

Commenting on this win, Olivier Loison, Managing Director - Alstom India, said, “Our manufacturing journey in India began with the trains for Chennai Metro Phase-I in 2014, which was also the first Rolling Stock order win for us in the country. This new win brings us immense pride and we are honored to be reliable partners in improving Chennai’s urban transportation network.”

Previously, Alstom has manufactured and delivered 208 metro cars for the 54km of first phase + Extension of Corridor-I from Airport to Wimco Nagar and Corridor-II from Chennai Central to St. Thomas Mount. These train are equipped with Automatic Train Protection (ATP) and Automatic Train Operation (ATO), and regenerative braking system ensuring significant energy savings. In addition to this, the company has successfully designed, tested, and commissioned the track-works covering 45 kms of corridors I & II for the Chennai Metro.

“We are happy to once again partner with Alstom for this significant contract for Chennai Metro Phase-II. The advanced trains delivered by Alstom have been operating on our metro lines for many years now, proving their strong capability to cater to the India market. We are confident that the Phase II project will provide better connectivity with minimal impact to the environment and benefit the lives of millions of people living in the city”, said Rajesh Chaturvedi, Director – Systems & Operation from Chennai Metro Rail Limited (CMRL).

Supporting the government’s modernisation initiatives, Alstom has been at the forefront of introducing several breakthrough technologies in India with world class rolling stock, rail equipment & infrastructure, signalling and services. The company has successfully delivered metro trains for the cities of Delhi, Chennai, Lucknow, Kochi and is currently manufacturing for Mumbai Metro Line 3, Agra-Kanpur metro, and Indore-Bhopal projects.