7th Edition of The Economic Times Infra Focus Summit and Awards 2022 is slated to reveal a world-class charging station miniature concept model developed by National Highways for Electric Vehicles (NHEV). The pilot charging station will be India’s first on the 500-km E-highway i.e. the Agra-Delhi-Jaipur route. 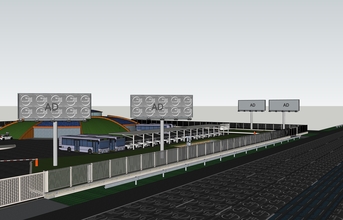 7th Edition of The Economic Times Infra Focus Summit and Awards 2022 is slated to reveal a world-class charging station miniature concept model developed by National Highways for Electric Vehicles (NHEV). The pilot charging station will be India’s first on the 500-km E-highway i.e. the Agra-Delhi-Jaipur route.

The pilot is a step toward upgrading the next 5,000 km of national highways into E-Highways by 2024. These futuristic charging stations are equipped with the advanced technology of connected vehicles, multi-modal connectivity, state-of-the-art hospitality services, a logistics hub and battery swapping for local e-mobility.

Exhibited as future of ‘Petrol Pumps’ with geopolymer concrete infra, early CapEx breakeven to hold the hub and spoke model for employment, economy and environment; building ‘Circular Economy’ around the stations in the rural circumference.

After a bold reform from the government with clarification in 2018 that “No licence like petrol pump is required to set-up charging stations a pilot under Ease of Doing Business program was initiated to resolve 4 other complexities in commissioning them 1) Layout, safety certification and standardisation 2) Financing EV Infra on Highway 3) Asset Utilization and early Breakeven. I am glad that National Highway for EV (NHEV) pilot has achieved its goals and everyone would be able to see the future of petrol pumps and fossil fuel stations in these charging stations at the miniature reveal” said Abhijeet Sinha, Program Director, Ease of Doing Business and NHEV.

Our PM has envisioned a change in Lifestyle for the Environment (LiFE) to achieve NET ZERO and COP26 goals which also need hybrid PPP models like in account for infra financing; where people and private entities both participate hand in hand to make surface transport clean and greener.

The aim is to bring lucidity in EV infra financing on highways to reduce the rigorous load of procurement dependent on government budgets by making charging stations business viable like petrol pumps and their e-hub experience like air terminals. This would speedily increase intercity e-mobility in users, initially without buying but using EVs through electric Buses, Cars, and SUVs fleets at cheaper fare, eventually increasing their confidence to buy EVs Sinha added.

NHEV is an E-highway pilot project based on the Public-Private Partnership (PPP) from the Ease of Doing Business. This 1st phase of the pilot is being implemented on the Jaipur-Delhi-Agra highway covering 500km. Going forward the pilot is to be scaled up to 5,000 km upgradation of regular highways into E-highways across India. The pilot includes setting up charging infra, car-bus fleet, roadside assistance for EVs along with theft-proof geofenced highways. The first two prototype stations of NHEV is commissioned in Gurugram with 100 EV chargers as India's largest charging station with 75 AC and 25 DC Chargers. These EV charging stations with 100 + 130 chargers with a capacity to charge 1,500 cars in 24 hours and record India's maximum 72 per cent utilisation with a minimal breakeven tenure of CapEx in 36 months.

First NHEV 210 km TECH-Trial Run was successfully conducted between Delhi and Agra to measure technical feasibility as per the Ministry of Power Guideline (2020) by NHEV to prototype 2 out of 12 highways marked to be converted into E-Corridors. 2nd phase of the 270 km TECH-Trial Run is scheduled to be completed in October between Delhi and Jaipur this year to revalidate viability and conclude the commercial pilot to price final cab & bus fares for e-vehicle passengers. The success of this pilot would commission 30 charging infrastructures on Agra – Delhi – Jaipur route financed on Annuity Hybrid E-mobility (AHEM) a model inspired by Hybrid Annuity Model (HAM) earlier introduced by Nitin Gadkari in 2015.