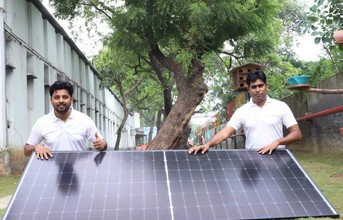 Loom Solar launched India’s most efficient solar panels. The introduction of revolutionising super high-efficiency products under Loom Solar’s ‘Shark’ series with a single panel capacity of up to 440 watt & 530 watt sets a new benchmark for the Indian solar industry.

In comparison to existing technologies, the efficiency of Shark series is 20-30 per cent higher and the Shark Bi-facial panels utilise both sides to generate power, to further raise the efficiency with the help of reflective surfaces like white paint, RCC roof and the installed height of 1.5 meters from the base.

Shark Bi-Facial, by Loom Solar also helps in 33 per cent saving of rooftop space with respect to existing technologies, thereby, the same space can be utilised for any other purpose or may enhance the overall capacity. This shall help households who have limited spaces including high-rise apartments.