Available in 4×4 and 4×2 option, with a rated payload of up to 1,250 kg, for a wide range of commercial applications 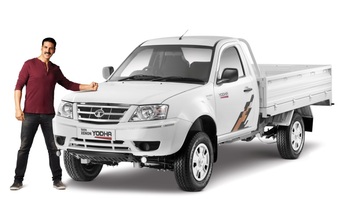 Tata Motors has launched its first product of the year, the new Tata Xenon Yodha, in the presence of its newly appointed brand ambassador, Akshay Kumar. The new Tata Xenon Yodha is suitable for a wide range of commercial applications – a rugged, comfortable, safe and stylish work horse, characterised by everyday practicality, high levels of performance and lowest operating cost, claims the Company.

The Tata Xenon Yodha comes with impressive features that give it a competitive edge among other pick-ups. The smart pick-up is available in multiple variants – 4×2 & 4×4 and in single & double cab options. It is targeted at diverse commercial usages including transporting agri-produce, milk, a cash delivery, as service support at construction sites and so on.