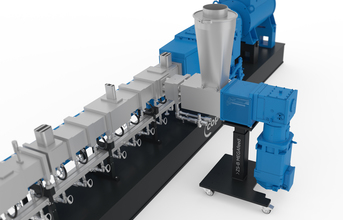 To make the recycling of lightweight, high-volume fibre and flake recyclate much more economical and, in some cases, even possible, Coperion has developed a new version of its ZS-B side feeder. Using the innovative ZS-B MEGAfeed, plastic recyclate with a bulk density under 200 kg/m³, long considered intake-limited and thus not worth recycling, can be fed in large quantities into large quantities Coperion’s ZSK twin screws extruder and be concurrently recycled and compounded.

The ZS-B side feeder’s novel design makes it possible to feed very high rates of fibre and flakes, such as PA, PE, PET, and PP. As a result, the ZSK twin screw extruder’s high capacity can be fully exploited when the ZS-B MEGAfeed is used. Very high throughputs in both mechanical and chemical recycling of post-industrial and post-consumer waste are achieved.

With a ZSK 58 Mc18 twin screw extruder, the throughput increases and thus, the potential of the new ZS-B MEGAfeed becomes evident. When recycling PA fibres with a bulk density of ~40-50 kg/m3, throughputs of 70 kg/h were previously achieved using conventional equipment. When the PA fibres were fed into the ZSK extruder using the ZS-B MEGAfeed, throughputs increased about fourteenfold to 1,000 kg/h. Similar results were achieved by recycling carbon fibres with a bulk density of ~50-70 kg/m3; in this case, throughputs increased from 50 kg/h to 2,500 kg/h using the ZS-B MEGAfeed. Recycling PCR (Post-Consumer Recycled) flakes increased throughputs from 50 kg/h to 700 kg/h and from 80 kg/h to 1,300 kg/h with multilayer film flakes.

Key to Economical Recycling of A Wide Variety of Plastics

Plastics previously considered not recyclable are becoming a valuable raw material using the new Coperion ZS-B MEGAfeed. For example, PCR flakes or recyclate from carbon-fibre-reinforced plastics can now be fed into the ZSK extruder at high feed rates and recycled economically.

In the case of mechanical upcycling, upstream processes necessary for compounding, such as compacting, melting and accumulation, are eliminated using the ZS-B MEGAfeed technology. In this recycling process, flakes and fibres can be fed directly into the ZSK extruder, which is melted, compounded, devolatilized, and filtered in a single step. In so doing, both investment costs and energy consumption drop. The production process becomes significantly more efficient. Moreover, the thermal product stress is reduced, and recyclate quality increases.

Even when recycling PET, the feed rate is no longer a limiting factor. With the ZS-B MEGAfeed, PET flakes and fibres can be fed into the ZSK twin screw extruder in large quantities with no pre-drying or crystallizing, where they can be processed with the highest degree of profitability.

ZSK throughput rates are very high with the ZS-B MEGAfeed. The ZS-B MEGAfeed can also feed large quantities of post-consumer waste, adding appreciable value to the chemical recycling process with the ZSKs. Preheating the recyclate via mechanical energy input of the twin screws thus becomes even more economical for further processing in the reactor.

Existing Coperion extruders can be retrofitted with ZS-B MEGAfeed technology to greatly expand their spectrum of applications and increase their throughput rates.