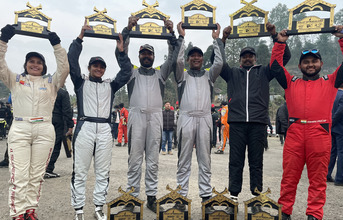 With the culmination of the final round of the Indian National Rally Championship rally in Kohima, Nagaland, Yokohama India capped off a wonderful season in 2022. The challenge presented by the Rally of Nagaland was faced by Yokohama-backed drivers.

In the overall results, Arnav Pratap Singh bagged the second position in the JINRC and INRC 3 categories. Multiple-time Gypsy championship winner Samrat Yadav dominated the category yet again to be accorded the winner's medal. All four champions were powered by Yokohama’s high profile Advan Gravel Rally Tyres fitted in their rally vehicles.

The INRC is the premier rally tour, organised by the Federation of Motor Sports Clubs of India (FMSCI). The ‘Rally of Nagaland’ was the fourth and final round of the INRC. It was officially flagged off by an advisor to the department of Youth Resources & Sports, Zale Neikha, at Indira Gandhi (IG) Stadium in Kohima.

Yokohama India has actively backed many talented drivers by providing them with an advantage of unmatched handling through its top-tier tyres in the INRC rallies and will continue to do so in 2023.