HHV Bags Award From the Ministry of Defence, GOI 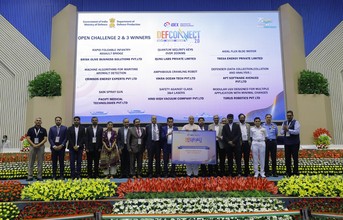 Hind High Vacuum Co. Pvt. Ltd. (HHV), a global leader in vacuum and thin-film technology, has won an award from the Defence Innovation Organisation (DIO), Department of Defence Production, Ministry of Defence, Government of India, at the recently concluded ‘DEFCONNECT 2.0. The award was presented in a glittering ceremony at the Vigyan Bhavan, New Delhi, by the Hon. Defence Minister Shri Rajnath Singh.

HHV had participated in the Open Challenge 3.0 organised by iDex (Innovating for Defence Excellence), an initiative of DIO, and bagged a ‘Certificate of Recognition’ for its indigenised & innovative work on Laser Safety Coatings for the Defence Industry.

iDex, funded and managed by DIO, aims to create an ecosystem to foster innovation and technology development in Defence and Aerospace by engaging Industries and providing them grants/funding and other support to carry out R&D, which has good potential for future adoption for Indian defence and aerospace needs. The iDEX Open Challenge creates opportunities for innovators to propose ways to harness their technology capabilities to strengthen India’s defence capabilities.

“Today, lasers can be found in many applications, especially laser guns used in defence, because the high-power densities that lasers achieve pose a serious risk to the eyes and skin. Laser Safety Coatings are designed to protect human eyes from laser beams and are categorised into several hazard classes 2M, 3R, 3B and 4, depending on their power limits. The unprotected human eye is susceptible to laser radiation and can be permanently damaged from direct or reflected beams.” said Prasanth Sakhamuri, Managing Director, HHV. “In this innovation, the HHV team at Bangalore developed a unique design of optical coatings on glass substrates that can be used for Laser Safety Glasses to be worn by defence personnel and Laser Safety Coated Periscope Prisms used in armoured carriers, Submarines and battle tanks providing complete protection to the personnel.”