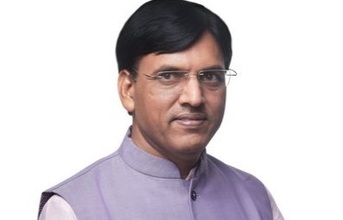 L&T-built offshore patrol vessel ICGS Varad was commissioned into the Indian Coast Guard (ICG) by Mansukh Mandaviya, Union Minister of State for Shipping (Independent Charge) and Union Minister of State for Chemicals and Fertiliser at L&T Kattupalli shipyard, near Chennai.
ICGS Varad set a record in Indian shipbuilding industry by becoming the first major defence ship to clear all Sea Acceptance Trials (SATs) in a single sea sortie, underlining the high quality of design and construction of these ships. The vessel is fifth in the series of seven Offshore Patrol Vessels (OPVs) contracted by Ministry of Defence on L&T in March 2015.
The commissioning comes on the heels of launch of the sixth OPV ICGS Vajra a day before at the hands of Geeta M Mandaviya, wife of Mansukh Mandaviya. Both ceremonies were held in the presence of Director General K Natarajan, PTM, TM, Chief of Indian Coast Guard and other dignitaries.
Taking the company’s track record of early deliveries forward, ICGS Varad was also delivered ahead of contractual schedule like previous four OPVs. Further, the ICGS Varad was built and handed over after trials within 19.5 months from its keel-laying in Jul 18, which is a record in Defence shipbuilding in India.
The OPVs are about 97-m long, 15-m wide, have 3.60-m draught, 2,140 tons displacement and have a range of 5,000 nautical miles. They can attain a maximum speed of up to 26 knots. The entire design and construction process has been certified by American Bureau of Shipping and Indian Registrar of Shipping and overseen by the Indian Coast Guard’s resident team at Kattupalli.