Indigenously developed facility is one of its kind in India 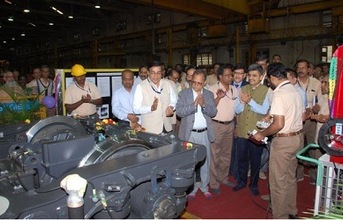 BEML a Miniratna GoI Undertaking under the Ministry of Defence set up Bogie Traction Motor Run test facility for Metro at its Metro manufacturing unit at Bangalore. At a function held at BEML Bangalore Complex, the facility was inaugurated by Ajay Seth, IAS., MD Bangalore Metro Rail Corporation (BMRCL) in the presence of Deepak Kumar Hota, CMD BEML and other senior executives of BEML & BMRCL.

The indigenously developed facility is one of its kind in India, will help in improving metro train ride quality and increases the reliability of coaches. This will run on electrical drive type for checking the drive from Traction Motors to Wheels.

It may be recalled that BEML had supplied 150 metro cars to BMRCL which are running as 3 car train sets.

In addition to above, against a contract of 192 cars, BEML so far supplied 105 cars for conversion into 6 cars train sets and balance are being delivered progressively by June 2020 which is helping in decongestion of Bangalore traffic.

BEML is currently supplying world class metro cars to Kolkata and Mumbai in addition to cars already supplied to Bangalore, Delhi and Jaipur. BEML is the leading manufacturer with 48% market share in Indian Metro segment.