In all, 21 cement companies had authorised CMA to negotiate with the Trade Unions on behalf of them. 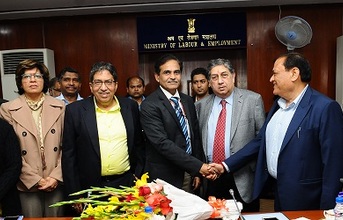 Officials at the momentous signing of the Memorandum of Settlement towards employee wages for the cement industry.

The Cement Manufacturers’ Association (CMA) and Federation of major Central Trade Unions (INTUC, AITUC, BMS, HMS, and CITU and LPF) have signed a major wage settlement before the Chief Labour Commissioner (Central) to benefit around 20,000 employees in the Indian Cement Industry by way of an increase in gross pay, enhanced dearness allowance and service weightage.

The present settlement is for a duration of four years from 01.04.2018 to 31.03.2022. The settlement provides for an increase of Rs. 5,000/- per month in the Gross Pay of cement employees (to be paid in two instalments of Rs. 2,500/- each in April 2018 and April 2020). The settlement also provides for enhanced Dearness Allowance, Service Weightage benefits and other benefits. Arrears for 11 months will be paid in two installments.

In all, 21 cement companies, consisting major Cement companies of the Country, which covers 60% of Country’s total cement capacity had authorised CMA to negotiate with the Trade Unions on behalf of them.

N Srinivasan, Vice-Chairman and MD, The India Cements Ltd and past President of CMA, who had previously provided leadership to the wage negotiations on behalf CMA in six earlier settlements, was again requested by CMA business leaders to lead the charge for this wage settlement.

CMA, the only Employers’ representative body for the cement industry in India, has been representing the employers in wage negotiation from 1978 onwards. Together with the current Settlement effective 01.04.2018, there have been eight such national level settlements. The current settlement is unique in today’s scenario as it is the only industry-wide National level Settlement in Private Sector.

At the signing of the settlement, N Srinivasan said, “The Cement Industry is facing many challenges. Not all regions are prosperous. Limestone deposits are available only in seven States. The industry had faced weak demand in the last seven years. It is left to face enormous cost pressure. At the same time, Cement Industry has been a benevolent employer. The national level, industry-wide settlement since 1992 is unique as it is collective bargaining in its truest sense as the management and the unions sit across the table and then it is signed before the Central Chief Labour Commissioner in New Delhi. This has assured industrial peace in the industry in the last 26 years. I would like to congratulate all my colleagues at CMA and the Labour Union/Federation Leaders for realising the pact.”

Mahendra Singhi, President, Cement Manufacturers Association & Managing Director and CEO Dalmia Cement (Bharat) Limited said, “I am thankful to all the Labour Union/Federation leaders, the workforce, the Chief Labour Commissioner and my colleagues in the Cement Industry at CMA for ensuring that the settlement continues to assure industrial peace and harmony over the years. Equally, I am delighted that we have been able to arrive at – each time – settlement(s) that have been to the satisfaction of all involved. As an Industry, we are collectively committed to creating sustainable opportunities for better livelihood for our employees and being partners to the Government for creating sustainable business operations so relevant for the growth of the Nation.”

K K Maheshwari, Managing Director, Ultratech Cement Limited, who has actively participated in the wage negotiations said, “The Cement Industry is committed to creating a viable ecosystem for the better functioning of the industry and its employees. The Cement Industry contributes significantly to national development not only as a partner for infrastructure development in the Country but also as a key contributor for generating employment.”

Speaking at the signing of the pact, Rajan Verma, Chief Labour Commissioner (Central), Government of India, expressed immense satisfaction on the occasion and stated, “I am pleased that CMA, the Cement Industry and the Labour Union/Federation leaders had been able to arrive at an amicable settlement in such a short time. We are happy to support this, and I would like to congratulate CMA, the business leaders and Labour Union/Federation leaders for realising the pact. The Cement Industry is an important industry for the inclusive growth of the Country and there has been a change in approach with the value of industry being well appreciated on both sides.”