Commissioned by IndianOil and HPCL 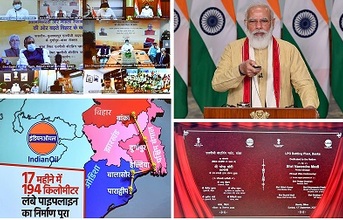 The projects include the Durgapur-Banka section of the Paradip-Haldia-Durgapur Pipeline Augmentation Project and two LPG Bottling Plants.

Prime Minister Narendra Modi dedicated to the nation three key projects related to the Petroleum sector in Bihar via video conferencing. The projects include the Durgapur-Banka section of the Paradip-Haldia-Durgapur Pipeline Augmentation Project and two LPG Bottling Plants. They have been commissioned by IndianOil and HPCL, PSUs under the aegis of the Ministry of Petroleum and Natural Gas.
Speaking on the occasion, the Prime Minister said the special package announced for Bihar a few years ago, focused much on the state's infrastructure. He said the special package given for Bihar had 10 big projects related to petroleum and gas worth Rs 21 thousand crore. Among these is the seventh project which is being dedicated to the people of Bihar. He also listed the other six projects which had been completed in Bihar earlier. He expressed happiness that he is inaugurating the Durgapur-Banka section (about 200 km) of an important gas pipeline project for which he laid the foundation stone about one and a half years ago. He lauded the hard work of the engineers and laborers and active support of the state government for completing this project on time, in spite of the challenging terrain. He lauded the Chief Minister of Bihar for playing a big role in making Bihar come out of the work culture in which one generation used to start the work and the other generation completed it. He said this new work culture needs to be strengthened and it can take Bihar and East India on the development path.
The Prime Minister said the Bhagiratha effort to connect eastern India with Paradip on the eastern seaboard and Kandla on the western seaboard began under the Pradhan Mantri Urja Ganga Yojana and seven states will be connected through this pipeline, which is about 3000 km long, of which Bihar also has an prominent role. The line from Paradip - Haldia will now be further extended to Patna, Muzaffarpur and the pipeline coming from Kandla which has reached Gorakhpur will also be connected to it. He said when the entire project is ready, it will become one of the longest pipeline projects in the world.
END