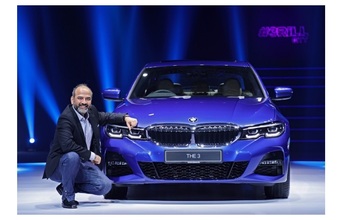 Rudratej Singh, President and Chief Executive Officer, BMW Group India said, “The 3 is the heart and soul of BMW. As the ultimate sports sedan, for over four decades, it has been the flag bearer of ‘Sheer Driving Pleasure’. In its new avatar, the 3 has outdone itself once again! Built for thrill and driven by technology, the all-new BMW 3 Series is an automobile that creates an impeccable harmony between the driver, the machine and the road. Enthusiasts waiting for the perfect luxury sports sedan will be undoubtedly drawn to its new design, generous space, luxurious interiors and host of innovative technologies. Our current patrons, who swear by the unmatched driving character of the 3, will be equally thrilled with its enhanced best-in-class handling and agility.”

The all-new BMW 3 Series makes an incredible impression with segment-first technologies for an even better driving experience. Making its debut in the all-new BMW 3 Series is the BMW Virtual Assistant, a digital personality of the vehicle that responds to voice commands. It sets a new benchmark for voice recognition. Drivers can operate a number of car functions simply by speaking to their BMW Virtual Assistant. It can be addressed by saying “Hey BMW” or a customer-defined wake word, thereby adding an individual touch to the car. Hands do the talking with BMW Gesture Control, which is part of a rigorously thought-out operating concept that recognizes six pre-defined hand movements for control of a number of functions. The spread of driver assistance systems is more extensive than ever. The Reversing Assistant provides unmatched support in reversing out of a parking spot or through narrow driveways. It keeps a record of the last 50 metres driven and assists by taking over the steering.