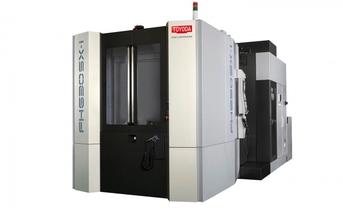 Toyoda will also be displaying two grinding machines at the show, the GE4-i and the TG4. The newly redesigned GE4-i CNC cylindrical grinding machine features enhanced thermal stability and ergonomic dual pulse generators to increase flexibility and ease of part setup in part programming. This series offers options of 19.6 in (500 mm), 39.3 (1,000 mm), and 59 in (1,500 mm) distance between centers, and Ø12.59 in (Ø320 mm) to Ø15.75 in (Ø400 mm) swing over the table.

Built for single applications requiring angular- and plain head grinding, the TG4 is a programmable, universal grinding machine with automatic wheelhead indexing. The machine’s wheelhead and table feeds are equipped with linear scales, which eliminate the need for manual compensation on critical geometries. The TG4 also has a proprietary direct-drive motor on the B axis for increased speed and accuracy.
END