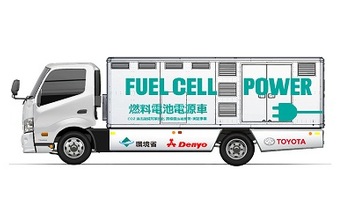 Denyo Co., Ltd. (Denyo) and Toyota Motor Corporation (Toyota) have jointly developed a fuel cell power supply vehicle that uses hydrogen to generate electricity. As a leading manufacturer of mobile (portable) generators, Denyo will work with Toyota to start verification tests with the aim of commercializing it and to help create a sustainable society, which is one of the aims of the Sustainable Development Goals (SDGs)*1. The project has been selected by Japan's Ministry of the Environment as a "Low Carbon Technology Research and Development Program."
Denyo and Toyota are both actively engaged in efforts for the global environment as they see related problems as important issues for management. As such, they have jointly developed the fuel cell power supply vehicle based on a belief that making efforts to apply fuel cell technologies to commercial and industrial vehicles is needed to further reduce CO2 emissions. Together, the two companies have also pursued further possibilities wherein electrified vehicles, considered one important way that they can demonstrate their belief and provide back to society, are able to provide added value as a large-scaled power supply, delivering electricity when and where it is needed in a range of scenarios including disaster-stricken areas without power and entertainment venues such as outdoor concerts.
Many of the current generation of power supply vehicles use diesel engines to provide power to the vehicle on the road and when generating electricity. Using fossil fuels as energy, they emit substances of environmental concern when driving and generating electricity, including the greenhouse gases, carbon dioxide (CO2) and nitrogen oxide (NOx). Fuel cell power supply vehicles, on the other hand, use fuel cells to provide power. This eliminates the emission of substances of environmental concern, enables up to approximately 72 hours of continuous power supply, and provides water for showers and other uses as a by-product of power generation.
The Toyota/Denyo fuel cell power supply vehicle that was jointly developed this time is based on Toyota's "Dyna" light-duty trucks, equipped with the fuel cell system of Toyota's Mirai Fuel Cell Electric Vehicle (FCEV) as its power source.
END