“Switzerland based NUM AG opens a branch in India” 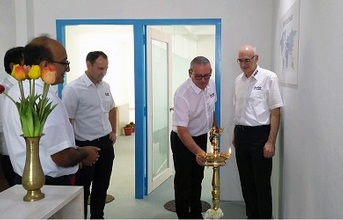 NUM AG has opened a branch in Bangalore in November 2019. With this expansion in Asia, the international company with headquarters in Teufen, Switzerland, further reinforces its position as a technology leader in the field of CNC controls. With the expansion to India, NUM increases its local presence there as well as its customer-oriented sales and service offering. “The location in Bangalore will enable us to respond much more quickly to customer enquiries and further expand our brand in the region. We have been well represented in China and Taiwan for many years and would now like to further strengthen our position in Asia,” says Rajesh Nath, Managing Director of NUM India. This latest expansion secures jobs worldwide, as well as creating new employment opportunities in India. Rajesh Nath and NUM CEO Peter von Rüti set up the branch in the south of Bangalore. The offices are located in a modern office complex in the business area of Jayaprakash Narayan Nagara district. “By opening a branch in India, we are exploiting our growth potential. At the same time, the Indian team is expanding our expertise in sales, service and after-sales support,” adds von Rüti. NUM believes that Bangalore, as a high-tech location, will strongly influence the CNC market in the future and thus significantly promote the development potential for CNC controls. With the new office in Bangalore, NUM is now represented internationally at twelve locations.