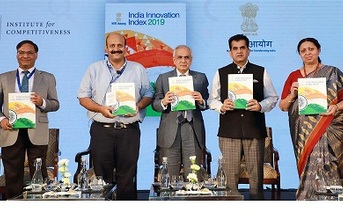 Dr. Rajiv Kumar expressed hope that “the India Innovation Index would create synergies between different stakeholders in the innovation ecosystem and India would shift to competitive good governance.” Shri Amitabh Kant added that “India has a unique opportunity among its myriad challenges to become the innovation leader in the world.” Renu Swarup said, “cluster-based innovation should be leveraged upon as the focal point of competitiveness.” Shri Ashutosh Sharma said, “The index is a great beginning to improve the environment of innovation in the country as it focuses on both the input and output components of the idea.” Vaidya Kotecha said, “The index is a good effort to benchmark the performance of the state with each other and promote competitive federalism.”