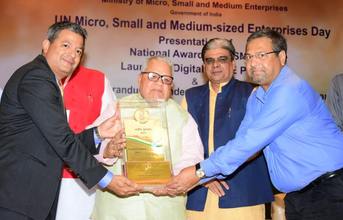 Alok, India’s leading masterbatch producer, won its second National Award for Innovation by the Government of India on June 27, 2017 at the Pravasi Bharatiya Kendra, New Delhi.

Alok’s UvNox Mulch masterbatch is made in line with the government’s flagship ‘Make in India’ initiative and designed to add material durability to mulch films produced in India. It is customized to withstand season fluctuations and is agrochemical resistant which protects the final produce from unwanted contamination. The additives used in the making of UvNox Mulch are almost 40% cheaper and at par with globally available solutions.

Alok has been honoured with the National Award for Innovation twice in consecutive years. In 2016, Alok was awarded for two solutions - LumaNex and ThermoFlux. LumaNex works on the concept of diffusing harsh light into a softer form, without sacrificing the lumen intensity of the LED.

This not only prevents damages to the eyes caused by unfiltered LED light, but also saves energy through superior light transmission. ThermoFlux evenly distributes heat generated from a device to improve performance and service life.  It addresses the issue of heat build-up in electronics, appliances, lighting, automotive, and industrial products.